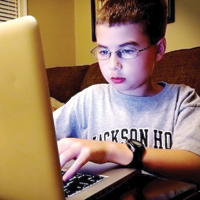 It’s a wild new wired world we all live in, and the people who are going to run and thrive in it aren’t always the ones you’d expect. It might not be a Nerd Genius or driven entrepreneur like Steve Jobs or Bill Gates who comes up with the next big digital thing. It might be your friend or your neighbor — or it might be a local 10-year-old. Maumee Valley Country Day School student Jonathan Buchanan recently became the youngest person in the world to have an officially approved app for sale at Apple’s store, with the release of his homebrewed math-puzzle game ChipTrading. We caught up with Jonathan for a chat.

How did you get into developing? Did anyone give you any help?

When I was about six, my dad wanted me to learn how to make websites. At first I didn’t want to, but then later I decided I did. About a year after that, I decided I wanted to make iOS apps [Apple’s iPhone and iPod operating system]. So I got a book to teach me how to do it, and I started developing! I think it’s fun.

Was this game, ChipTrading, your first project?

Actually, I make a lot, but that’s the only one I’ve ever sent to the App Store. I’ve got one that’s like a story with images, and you have to make decisions. I also made one that’s kind of like Hangman, and one where a ball bounces around on the screen and you have to catch it.

It’s a game I used to play in school. All of my friends liked it, but we were kind of upset that we could only play it in school. I told them “Hey, I can make an app for that!” They thought it was pretty cool.

What do you like to do when you’re not at a computer?

I play baseball. I like to play second base and pitcher. I’m a big Indians fan! And I also play the violin — I’ve done it for four years. And I’m on a LEGO robotics team.

Any other projects in the works?

I’m working on one with my dad called Daystream. It’s like a social networking site. My dad’s doing the website and I’m doing the iOS app.

Would you want to do this for a living?

Maybe I would. I’m thinking of maybe starting a computer company later.

Would you hire your dad?

Probably not. [Lots of laughter.] I don’t know. Maybe.

Search for “ChipTrading” at the App Store if you want to check out Jonathan’s craftsmanship. It sells for only 99¢, and is fun and educational for any kid learning multiplication.