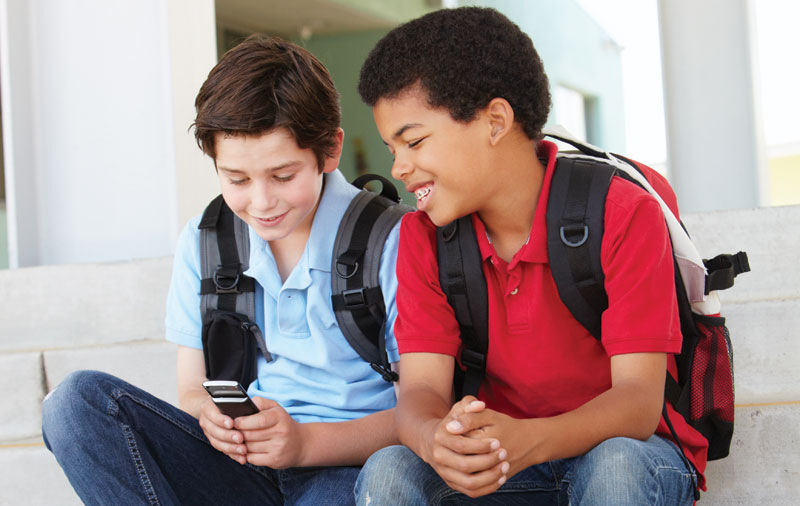 As parents, we want to keep our children safe, and cell phones seem to promise to do just that. But at what age does a child become responsible enough to be able to handle all that might go along with a cell phone, like texting, the Internet, minutes and charges, manners and more? And what guidelines do you need to have in place before handing over that phone?

Some parents are dead set on their pre-teen not having a cell phone. Jennifer McClure, mom of three, makes the point, “Until they or their classmates are old enough to drive, they shouldn’t be stranded anywhere, because some adult should be with them. So why would they need a cell phone?” It would seem that few elementary age children are responsible enough to be able to handle a cell phone. To combat some of the bigger problems, you can get a phone without Internet access or texting services, and it can also have set minutes and a tracking device.

All families are different, though, and face different circumstances. Suzanne Andrews, mom of four, says, “I think kids ‘need’ cell phones either when they start driving or if their family situation is such that they or their parents are difficult to reach.” Divorced, single or working parents, for instance, like to make sure their child has a way to reach them at all times, no matter how young the child.

Shelley Ryan, mom of two teens, says, “All depends on the kid and what they do. Both of my kids have had jobs/volunteer gigs long before they could drive (and before they were teens), and both had phones so they could call when they were ready to be picked up or had a change of plans. I also like them to have a phone if they go somewhere on foot or on a bike without a parent. It gives them a little more freedom to go out into the world on their own.” It also gives them a sense of independence and they don’t have to seek out an adult and ask to use their phone.

But parents, beware! Chris Oliver, mom of one and middle school counselor, says, “Take it from a woman who spends every working day with 800 adolescents, you need to monitor your child’s texts. And regarding the camera attached to that phone: nothing good is going to come of that!”

Here are some rules and issues you could discuss with your child to ease her into a cell phone instead of turning it immediately into a huge responsibility and potential problem:

Responsibility — A cell phone comes with a lot of baggage! It needs to be charged, kept out of reach of younger children … not be lost. There’s also the factor of younger kids possibly not being able to use good judgment or understanding with things like inappropriate texts/use of the camera, the financials of a cell phone, Internet service, etc.

Cost — Make sure your child understands the financial picture involved with a cell phone. If they have a prepaid phone, they can see how many minutes they have left and need to understand how much those minutes cost. If you get a set number of minutes to include texting for your child, check your account online weekly to make sure your child isn’t going over minutes and costing you hundreds of extra dollars. Make sure your child knows that things like games, ring tones, sending pictures and Internet time can cost extra and have them pay you back for overages.

Safety — Be sure to find out and talk about the law in your state concerning texting or talking on the phone while driving and some of the consequences that have happened to other kids because of doing so.

Model being prepared — Always have backup phone numbers in case your child loses his cell phone, it dies, or your child does not answer (or if your child is grounded from his phone). Make sure you have numbers for coaches, schools, friends, the parents of your child’s friends, etc.

Manners — Kids should know basic telephone manners no matter where they are. Kids sitting in the same room text each other. Keeping them from other activities and from spending time with family members. And no phones at the dinner table, whether it be at home or a restaurant.

Consequences — Be prepared to take the phone away if your child misuses the privilege of having the cell phone. Examples would include texting inappropriate pictures of themselves or others to friends or classmates, using the phone as a way to cheat on tests at school, making prank phone calls, bullying or visiting inappropriate web sites.

Kerrie McLoughlin’s five kids range in age from 4-13 and so far none of them has a cell phone.
Check ’em out at TheKerrieShow.com.