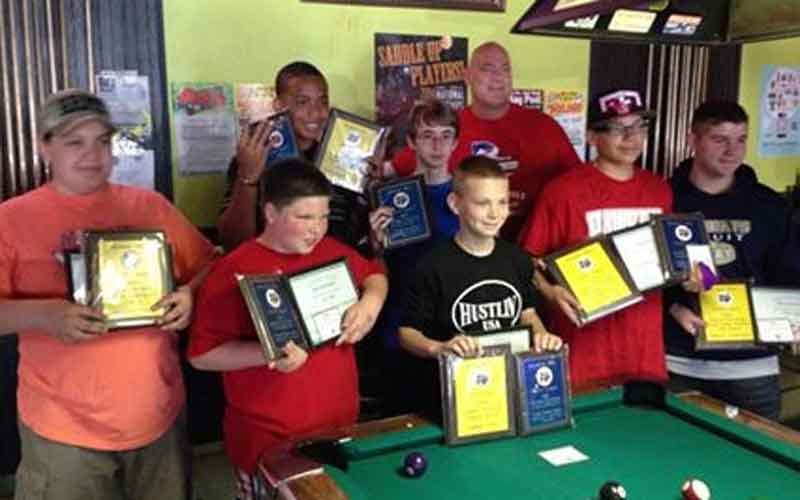 Playing pool is a fun way for kids to spend their Sunday afternoon with the North American Poolshooters Association (NAPA) Junior Leagues.

Jay Swisher and his fiancée, Jeanie Yelverton, are the Northern Ohio NAPA league operators as well as the league operators for the Junior League in the Toledo area.  BCSN broadcasts the sessions, and although they took the summer off, the broadcasting will begin again, says  Swisher who is also a National Council Board Member for the NAPA League. NAPA Junior Leagues accepts kids from ages five to 18.

“Don’t let the age fool you,” Swisher says. “If the player is [too] short, they can use a step stool. Players can be any level from beginner to advanced.”

They meet on Sundays at Miss Cue South at noon and practice for an hour before the game begins at 1pm. The game lasts a couple of hours, Swisher explains.

“We take much pride in this Junior League. It’s the only one in our area,” Swisher says. “The greatest prize is to watch these kids progress, have fun, meet new friends, high five each other, and the sportsmanship is awesome.”

At the end of the session, a pizza and pop banquet is held and each kid earns a reward, he explains, “Players also qualify for the NAPA National Junior Championships. Last year it was in Soaring Eagle [Casino and] Resort where our area had a national champion, runner up, third place, fourth place, and seventh place respectfully,” Swisher says.

“We have been league operators for four years, being the 2013 NAPA League Operator Runner Up and the 2014 NAPA League Operator of The Year,” Swisher says. “Now National Council Board Member and Director of the Junior Division. With all that said, we cherish this Junior League the most. Kids smiling, having fun, being great sports, and seeing the closeness they become is just an awesome feeling.”