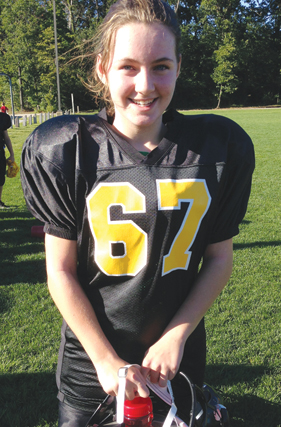 “I never actually watched football on TV but always wanted to play,” says Sylvania McCord Junior High School student Anya Wojtkowiak. “I really liked playing football in the yard with neighbors and wanted to try it. I kept begging my mom to let me try out for the team and she wouldn’t let me until I promised her that I would wear something nice for picture day.” To her mother’s surprise, Anya dressed up for her school photo and the rest is history. Toledo Area Parent talked with Anya about the ups and downs of being the sole female on her Sylvania Recreation 6th and 7th grade football team.

I understand you and your mother made a deal regarding your picture day attire. How did looking like a lovely young lady for a photo lead to wearing cleats and a helmet?

“I went to my school’s orientation and they had flyers about the Rec football team so I took one. I spoke with one of the coaches who was there that night and he asked me to come for conditioning. I showed up and when the coaches started picking teams, I got picked.”

Is playing on an all-male team tougher than playing in your backyard?

“It’s a lot harder. I had to learn all the different positions even though I am a lineman. Also, no one is easy on me because I am a girl. I get bruised a lot.”

How do you deal with getting hit?

Do your teammates except you as an equal?

“At the beginning the boys were skeptical about me being on the team. I don’t know exactly when that changed but I think it was when I proved that I was helpful and a good player. I am not just standing on the sidelines and watching. I would say I get to play for almost the whole game. When we have a lot of injured players I get to play longer.”

Do you feel that being female has held you back in any way?

“No, not all. I wish more girls would play football. I get support from people in the stands too. I had a really good tackle and three of my classmates were cheering for me. It was so cool. I actually get a harder time from girls than boys about being on the team. On Fridays we wear our jerseys to school. So many girls ask why I would ever play football. I tell them I play because it’s fun.”

What does the future hold?

“I play for the Sylvania Rec and there is a weight limit. If you are over 115 lbs. you cannot run with the ball. I recovered the ball from a fumble and I had to take a knee. Next year if the McCord coach asks me, I could play for them and there are no weight restrictions.”

Is there anything you want to say to your teammates?

Yes, we are close even though we don’t socialize off the field. I would thank them for supporting me. I would rather be playing football than cheering on the sidelines. I’m just really glad I have a chance to play.

Fun Facts about the Bruised Beauty

When She Grows Up: An environmental scientist and shes hopes to be the first female to play in the NFL or, even better- play for Notre Dame