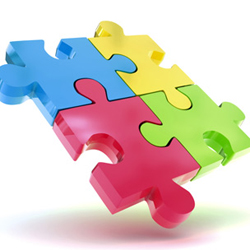 High hopes in the face of autism

We met Barrett 20 minutes after he was born, which was arranged through our adoption plan. His mother had drug-abuse issues during her pregnancy, and we knew that something might be off. He was really itty-bitty, and by the time he was four or five months old we started noticing things. We thought he had acid-reflux because he didn't want to lay down, but it was really what I refer to as a 'comfort-snob' — he had to have thicker blankets and three mattresses.

We tried different things to get him to sleep and relax, and he didn't really enjoy being held as a baby. He was like a little Houdini, breaking all the child-safety features; he'd pull out the electrical outlet covers when he was seven months old. By the time he was eight months I started noticing he seemed delayed in some areas, like speech or pointing, and when he was a year old he used a couple of words but he wasn't really speaking. By the time he was 18 months old, as parents, we agreed he should be assessed by professionals, who deemed him special needs.

You have super-high hopes for your children, and hearing them referred to as special needs is kind of like getting kicked in the stomach. You have so many questions — are they going to have friends? Are they ever going to have a job? Are they going to be able to get married, or have a girlfriend? What does this mean for their self-esteem? What are realistic expectations and what can we do to intervene or change this, to get him to the best that he can be? Every child is different and every child's potential is different, and the best thing you can do is accept them for who they are.

What's most different for me is day-to-day life. Most people can get something done while their child is awake. I can't. He can't be left unattended for more than three minutes before something happens. He's a daredevil. He tried to get on his roller skates and roll down the stairs!

You become so accustomed to your life, that when you go hang around your friends' kids who are developing typically, you see the things that they get to do with their children that you don't. My son's very affectionate; he's super-funny and he's got the sweetest heart, but you don't have that same back-and-forth dynamic. You get that tinge of jealousy. It's selfish, but it's reality.

Our whole world becomes engulfed and enclosed, and sometimes it seems like all you do is eat, sleep and breathe special needs stuff. You really don't want to look at your son and think first and foremost "my kid is special needs." No, this is your baby. This is the love of your life. The love of your life just happens to have these extra challenges."
— Karin Martin, Barrett's mom

Assuming the worst with Down Syndrome, but finding joy 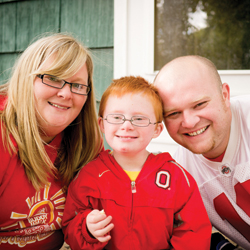 "We found out that Kaiden likely had Down syndrome shortly after his birth. It was big shock. You automatically assume the worst. At the hospital, they gave us a packet of what to expect and we discovered the Down Syndrome Association of Greater Toledo. We kept researching online and got connected through DSAGT, and the more I learned and the more I found out from other parents in the same situation the more comfortable I became. Learning that others are dealing, and have dealt, with the same issues was very helpful.

I learned that Kaiden would be able to do anything any other kid could do, it just might take him a little longer. That proved largely true. He was three before he could walk, but he did learn to walk. Eventually he learns whatever he's trying to learn and he's just like any other six year-old: he's completed preschool, he colors, he draws, he has tons of friends from school in our neighborhood. Other kids love playing with him. They come over and they're all about helping and engaging with him.

Kaiden always points out the most amazing yet simple things. He appreciates the whole world around him.

When Kaiden was one, I became a secretary for DSAGT and now I'm serving my third year as its president. This experience has completely changed my life for the better. As a family, we never would have made the friends that we have without the association.

I get to learn from Kaiden everyday. The biggest thing he's taught me and my husband is how much we take for granted. He loves everyone just for who they are. He always points out the most amazing yet simple things. He appreciates the whole world around him. He's the joy of my life." 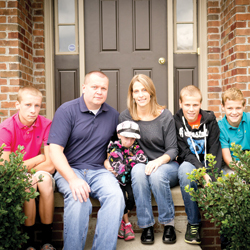 "We first realized there was something wrong with Kaylee when she turned six months old and was still nine pounds and six ounces. We eventually took Kaylee to a genetics doctor at the University of Michigan. I remember he came into his office and gave us a photo. It was of another little girl who looked almost exactly the same as Kaylee. That's when he told us she had Progeria.

Progeria is a very rare genetic disorder in which the body ages eight to ten times faster than normal. Children with the condition have almost identical features with an average height of 36 inches. Only 22 people in the country have Progeria, with only two in the state. Interestingly, we both live in Northwest Ohio.

We've been really fortunate in that Kaylee has been able to live a normal life … she does everything: dance, karate, softball.

We just finished our first drug trial to reduce Progeria's artery damage, and the results were encouraging. We're now participating in our second trial to slow the disease down. Our family organized our seventh annual 5K run/2-mile walk on October 13 to raise money for the Progeria Research Foundation. We raised more than $50,000!

We've been really fortunate that Kaylee has been able to live a normal life. She does everything you'd expect of a nine year-old: dance, karate, softball, and she thinks like an average third grader. I tell people you gotta meet her and see what a little spitfire she is. I can remember when her little brother finished his first haircut, she jumped up in the chair and whipped off her hat. 'My turn!' she said. She's bald, you know, so it was hilarious. She just has a great sense of humor. Her good attitude is such an inspiration."

With diabetes, pain, but pride in community

"We didn't know George had a special need until he was four years old. We were visiting family in Cincinnati for Christmas and noticed he looked ill. We visited my family doctor from when I was a kid, and he decided we needed to take him to the Cincinnati Children's Hospital. George was diagnosed with Type I Diabetes.

We spent four long days in the hospital learning how to check his blood sugar and give him insulin shots. We practiced on oranges and had to demonstrate proficiency before we could take him home. I can remember that was a scary time. I kept thinking, 'How am I going to handle this?' and 'How am I going to get George to understand what was happening?'

We've tried to keep George's life as typical as possible, but his condition can still be disruptive. He no longer takes shots but rather has an insulin pump which functions like an IV, and that needs to be monitored. He also needs to prick his finger four times a day. That can be difficult, especially at school. We were excited when we discovered Diabetes Youth Services in Toledo, which put us in touch with similar families and helped George realize he wasn't alone. Over the years, he's attended activities and youth camps and I started volunteering, eventually becoming a board member. DYS even gave a presentation at George's school, which demystified his condition for his classmates.

I'm always amazed with George's attitude. He never says 'Woe is me.' Diabetes is a painful disease with the constant pricking and the pump, but he never complains. Maybe it's because he's just used to it after so long, but he soldiers on and busies himself being a normal kid."

Take a look at our special needs guide! 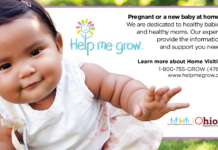 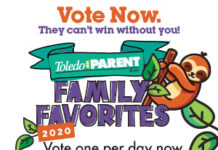 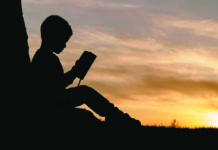