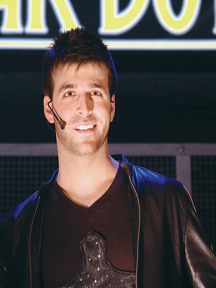 Michael Craig might have been born for the spotlight — but now he wants to help give area kids their own shot at the stage. Not even thirty, Craig is already a show-business veteran by any standard, with extensive experience on the biggest stages of all, but he's returned to his hometown of Perrysburg to help the next generation along. As the co-founder of Next Stage Studios, he's giving kids (and adults) the chance to learn singing, dancing, acting — all the skills they'll need to make the big time.

"I was always really drawn by the talent that our public school system had," Craig says, recalling growing up in
Perrysburg. "No one in my family was really theater-oriented; it was the school system (that inspired me)." Now, at a time when school budgets for performing arts are tight, Next Stage Studios is ready to step in.

Craig's experience and connections make the Next Stage experience work. After graduating from Perrysburg High in 2003 (thoroughly bitten by the theater bug), he left for the Big Apple and attended NYU, where he earned a bachelor's degree in music. But his real education came during his summers, when he joined the actors' union and began performing for real. He landed roles in high-profile productions, including the original High School Musical. After graduating, he starred in the off-Broadway hit Altar Boyz, which turned into a long-running gig. It was the fulfillment of a dream, but it slowly led Craig to the
realization that stardom isn't everything. "It was fun," he remembers. "But you're performing eight times a week for two years. It takes a lot out of you. For 90 minutes every night, my character never left the stage…it got to be a lot for a hometown kind of guy. That's when I made the decision to come back to Ohio." He had help — Craig gives Clark Ausloos, Next Stage's other founder, enormous credit. "He has this talent for teaching," Craig says. "He really gets along with everybody." And since arriving in Perrysburg two years ago, the pair have gone from giving private lessons to a handful of clients to running a school with 170 students. Next Stage opened in spring 2011 behind Levis Commons — the space "looks like a warehouse," Craig says, "but inside it looks more like a New York studio, with high, exposed ceilings."

Next Stage offers eight-week sessions for kids ages six to high-school. Many classes focus on musical theater ("you learn to be a triple threat," Clark says, "singing, dancing and acting"). But there are classes in traditional acting too, as well as improvisation. Each session culminates in a showcase performance, where students can strut their stuff in front of their peers, friends and family. Being the face of a big-budget production was a thrill — but Clark is also thrilled to be where he is now. "I don't regret any of it," he says. "It's been really fun. It's just so nice to see everyone so excited to come to class, and to see kids from different school systems coming together and building friendships." And like many things in life, Clark believes it's more about the journey than the destination. "We want to teach," he says, "rather than tell you what the end product is supposed to look like."