Brian Roush was raised in a military family, and says holiday traditions were few and far between. That’s the reason he and his ex-wife work hard to make sure their two and a half-year-old son, Jackson Robert, gets to experience customs from both parents’ families. Mom’s family Christmas isn’t complete without kielbasa, a type of Eastern European sausage, and Dad’s Christmas includes cookies from a 30-year-old family recipe. The family picks a live tree every year and makes sure to see “The Lights Before Christmas” at the Toledo Zoo. Jackson helps decorate the house with colored popcorn, and leaves a Christmas Eve snack of carrots for the reindeer and cookies for Santa. On Christmas morning, the family looks for Santa’s footprints from the stockings to the tree, then they enjoy French toast topped with red and green whipped cream, time in church, and visits to the grandparents. 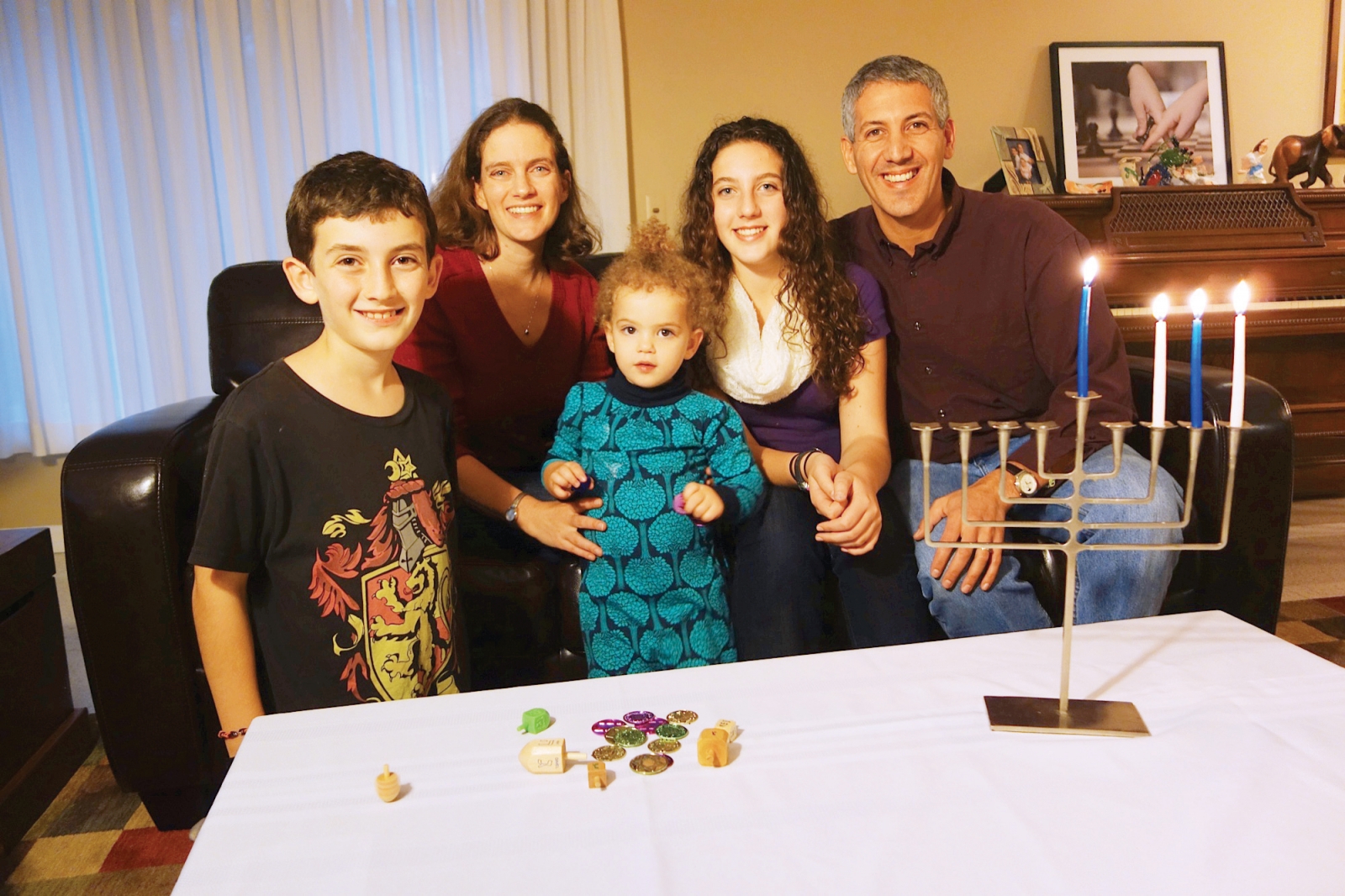 Hanukkah has a special meaning for the Musher-Eizenman family this year. They traveled to Israel this past summer, and visited the site where the Temple in Jerusalem used to stand. They will play with the dreidel they bought in Israel, with letters that stand for “A great miracle happened here,” and recall the two miracles marked by the holiday: the tiny Jewish army of the Maccabees that faced the Greek army, and the one-day supply of oil in the Temple menorah that lasted eight days. Foods cooked in oil, such as potato latkes and donuts, will be on the menu, and mom Dara notes she will have to add Thanksgiving foods to her table since the two holidays fall on the same day this year. The children Ella, 13, Jonah, 10, and Sylvia, 2, will receive chocolate coins called gelt.The family will light the candles on the menorah, exchange small gifts, and sing Hanukkah songs, all while basking in the joy of the Jewish holiday.

Muslims in our area won’t be celebrating the holidays in December. Their big holiday Eid occurred in October, in the Islamic month of Dhu al-Hijjah. Also known as the Feast of Sacrifice, the three-day festival commemorates Abraham’s willingness to sacrifice his son Isaac on God’s command, and marks the end of the Hajj pilgrimage to Mecca. In the Ayad household, family members celebrate with friends and family. Daughter Nadia explains, “Eid involves prayer, of course, so a trip to the mosque is in order. We get new clothes and celebrate with a lot of food. This year our family went to the Sultan Club to spend time with friends and have lunch. Many families in the Middle East will sacrifice an animal and donate it to those without food in celebration of Eid. Families in America usually donate large amounts of food and give to charity in celebration instead.” Nadia and her sisters were raised in the Muslim tradition, with additional celebrations of their mother’s faith, Catholicism. “I love getting to experience the festivities in both religious settings,” she said.

Janet Wawrzyniak is a long way from her native Venezuela, but she shares customs and traditions with her family during the holiday season.  The Christmas and New Year’s holidays are times for the family to get together for special meals, and one must-have is pan de jamón, bread filled with ham, olives, and raisins. She has several Nativity sets, including one that stays up year-round, and the family likes to recall the dining-room size set her grandmother has in her home in Venezuela. The family attends Midnight Mass in their best clothes, and New Year’s Eve is a special time, too. Janet, her husband, Jason, and their three sons, AJ, 14, Caleb, 12, and Lucas, 9, sometimes get suitcases from the attic and parade around the house at midnight, a symbol that they will be traveling in the new year. They greet friends and family with Happy New Year greetings that involve rubbing money on them, and follow the tradition of the grapes at midnight. Janet explains, “It is a Spanish tradition to eat 12 grapes, one for each time the bell tolls at midnight. Of course, we get confused about how many we have eaten because we are laughing so much. It is hard to eat so many that quickly, but if you can do it, you will have 12 months of good luck.” She adds, “We don’t follow the Venezuelan tradition of throwing rice to symbolize prosperity, because nobody wants to clean it up!”