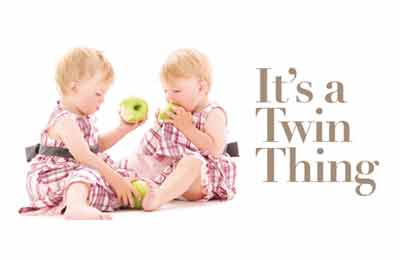 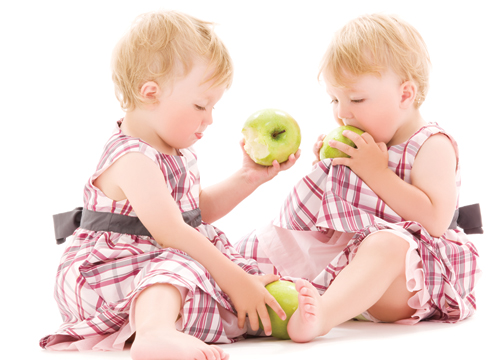 Double the trouble, but double the joy! If you think it’s challenging caring for one fussy baby or active toddler, try two. Local moms with twins share their tips for multitasking and enjoying every moment. For those who may have wondered what it would be like to have twins, three sets of parents provide insight into what life is like raising twin babies/toddlers.

What are some of the most difficult aspects of raising twins?

For Bill and me, it was really coping with the daily tasks, finding time to eat and cook, just basic day-to-day household stuff. When they were newborns, and we were first-time parents, it just seemed like they were hungry all the time, crying all the time, and there was just no time to even eat!

I like that they have a built-in playmate, especially right now. It’s also nice because they are on the same schedule, they eat the same things, they nap
at the same time, and I can take them both to the same activities.

What advice would you give parents expecting twins?

One of the best things some- one told me about was Mothers of Twins Club. It’s a national organization with a local
Toledo chapter. It has been an awesome resource. You can attend meetings or ask questions on their Facebook page. You can ask the craziest question ever and they won’t think it’s crazy at all because they’ve all been there!

What are some of the hardest parts of having twins? 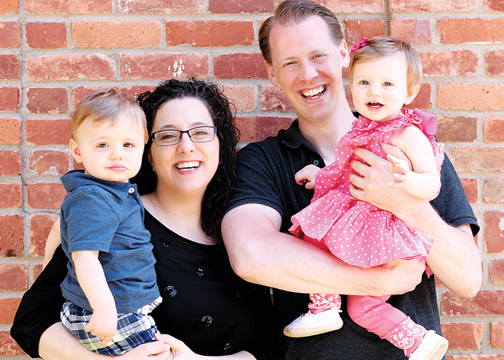 Tony: Staying awake.
Arwa: Yeah, because the whole sleep training concept is totally turned upside-down with two of them. If one of them is screaming, it wakes the other one up. When one is having a good patch with sleeping, the other is having a bad patch. Your body just gets used to not sleeping.
Arwa: Everyone always says, “It’ll be great because they will have a built-in playmate,” but really they just want to gouge each other’s eyes out. That’s the second hardest part of having twins.
Tony: We’re hoping Fisher Price makes some kind of WWE cage for babies.

Tony: Because they are our first children, I would never use the word “easy” for anything, but I’m glad we’re getting everything out of the way at the same time. We’re getting teething, sleep issues, walking, talking, all at the same time. Having twins, especially both a boy and a girl, also makes us very confident in saying that we’re done having kids.

How do you manage juggling everything?

Arwa: Who says we do?! In 35 years, I have never been late on a payment for anything…until the twins came along. You just have to learn to let some things go; you realize what’s important and what isn’t. Prioritizing is the biggest way we manage.

What are some of the hardest parts of having twins?

Kristy: I would say making sure we spend enough personal time, time alone with mommy and daddy, with each kid.
Eric: One, trying to keep them on the same schedule or two, the time manage- ment piece. For me, it’s juggling getting enough time for family–I’m in the middle of getting my MBA–while also working full-time.

Kristy: Actually, for us, I think it’s easier that our kids are doing the same thing at the same time. Because they’re the same age, they have the same interests, hit their milestones at the same time, nap at the same time.
Eric: There is no easy part of having twins; that’s an oxymoron. Sometimes they do keep each other entertained. It doesn’t happen very often, but when it does, it’s great.

What advice would you give parents expecting twins?

Eric: Keeping them on the same schedule was an important piece that worked really well for us.
Kristy: That’s the best advice we got. Early on, if one of them woke up without the other, we would wake the other and feed them at the same time.

In honor of all things “twins,” the Twins Days Festival in Twinsburg, Ohio, is the largest annual celebration and gathering of twins and other multiples in the world. It will take place on the first full weekend of August so mark your calendars now and make your plans. The theme for the 2014 Twins Days Festival is “Twin- stock – Groovy in Twinsburg!” and twins can dress however they want to channel that era. Expect to see a lot of peace signs and tie dye! Friday, August 1, Saturday, August 2, and Sunday, August 3. Admission $4/ person per day and children 5 & under/free. Twins Days Festival, 9825 Ravenna Rd., Twinsburg, OH 44087. 330-425-3652. www.twinsdays.org 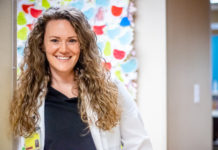 Things I Googled While Pregnant 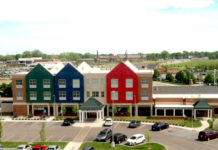 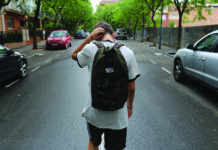 Getting Your Teens to Talk: Tips for Parents