From superheroes to princesses to pigs, these birthday boys and girls enjoyed magical celebrations featuring their favorite movie/television characters on their special day. For birthday party inspiration, read these examples of truly special celebrations.

Local Flair: Baymax cake from Cake by Jennifer and greenery from Creque Greenhouse

Activities: We had a bean bag toss, but mostly the kids played superheroes with their capes. I also took a photo of each child in front of the superhero city backdrop and emailed the edited photo to mom and dad after the party.

Outlook: With our first child and his first birthday party, I wanted everything to be perfect, but after three kids, I go with the flow and whatever happens, happens. The kids had fun; that’s what matters. Hudson was so excited because he woke up from an extra long nap that day and there was all this superhero stuff all over the house. He knew it was for him; he was so excited.

Traditions: For birthdays, our big thing is cake because I don’t bake. Each time it’s one of my kids’ birthdays, we sit down and pick out a cake together. That’s our big, fun thing to do.

Hours involved: Probably 3 the day of the party, 5-6 the week of, and 12 hours total. The capes took some work. I found a pattern online for the cape, cut them all out, used velcro and fabric glue for the front, cut out circles and letters out of fabric, and then used fabric glue to attach the initials.

Hours involved: I started over one month before the party with the crafts. I made a big Peppa Pig out of cardboard from diaper boxes. Then there was all the baking. I don’t remember how many hours… but definitely a lot!

Activities: We had the party at SkyZone. The kids jumped for an hour, then we went to the party room for pizza. Anna and Elsa showed up for 30 minutes, sang a couple songs, sang happy birthday, and then they took a of picture and signed an autograph for each kid there.

Bloopers: We didn’t tell Karsen [Elsa and Anna] were coming. We thought it would be a good idea for her to be surprised, but she was so shocked she wouldn’t say or do anything, even smile. She literally ‘froze’ when she saw her Frozen heroes! Of course, since then, she hasn’t stopped talking about them. Then we ran out of time in the room (we only had it for 40 minutes), and some kid popped in to tell us that we only had 10 minutes left, and we hadn’t even done cake or presents yet. So we basically had five minutes for ‘Happy Birthday’ and cake. 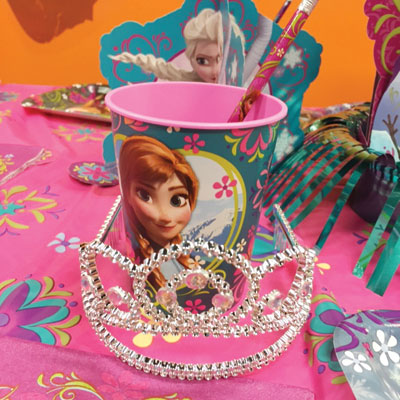 Fashion: Karsen wore a pink Frozen t-shirt from Gap. I told the parents that it was a Frozen party, so every kid wore Frozen stuff.

Party favors: Frozen pencils, bracelets, tattoos, cups, and a tiara for each little girl (and one little boy).

Sweets & Treats: You can bring your own food to Peace, Love, and Pottery, so we did a pancake and fruit breakfast. When the kids arrived, they picked what they wanted to paint, ate breakfast–I had bagels and coffee for the moms–and after painting we had cupcakes and sang ‘Happy Birthday.’

Activites: The kids picked out what they wanted to paint from the children’s area–the owner has a party room set up with items that are more child-friendly–and there’s a wide variety of things geared to both girls and boys, as well as adults: an assortment of animals–turtle, possum, owl, cat, and dog, planes, pumpkins, cupcakes. sports cars— just walls and walls of clay things waiting to be painted.

Special moments: You know, the cutest thing is that you get to choose the colors for painting, and I was watching some of the moms trying to get their kids to paint the turtle green, but the kids wanted to paint the turtle purple. The kids were really embracing their creativity.

Bloopers: Really the only hiccup was that by the end, the kids were ready to leave. We kept it to right around two hours, which included opening presents, and that was just the right amount of time. They were done being contained!

Party Favors: I paid for the pottery, so that was the party favor. Each item has a cost associated with it, so I asked the moms to keep it under $15. If we were going to do it, we were doing it right. I know … I’m a spoiler, but she’s my one and only!