McKenna Reitz, who has lost her hair, says that she is frequently stopped by strangers who ask her if she has cancer. While Reitz, thankfully, does not have cancer, she does have alopecia universalis, an autoimmune disease which leads to hairlessness from head to toe.

Reitz discloses, “People always ask if I’m going through treatment, saying ‘Can I pray for you? Can I give you a hug?’ I’m appreciative, but I’d rather those prayers go to someone with cancer.”

“I want to spread awareness about alopecia. I want people to become educated.”

Reitz describes one way to tell the difference between individuals undergoing cancer treatment and those with alopecia: eyebrows and eyelashes. “People going through treatment take a very long time to lose brows and lashes…if they ever do,” Reitz explains.

Three different types of alopecia attack hair follicles. Alopecia areata induces patches of hair to fall out, alopecia totalis produces the loss of all hair on the head, and alopecia universalis causes the loss of all hair on the entire body. Reitz has the most extreme and most rare type: alopecia universalis. “They don’t know why it happens,” Reitz says, “but there is a correlation between stress and genetics.”

“After I had [my first daughter], during stressful times, I would get a bald spot—the size of a quarter—and they would inject it with steroids and [the hair] would grow back.” 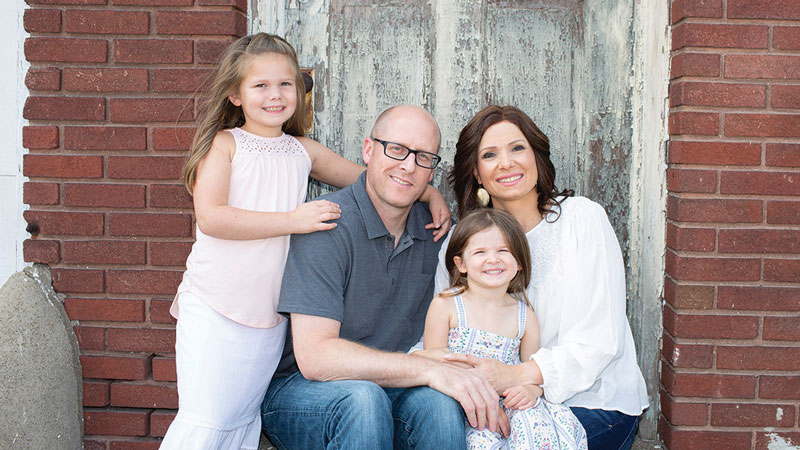 “After I had [my second daughter].” Reitz continues, “I will never forget when I felt a spot on my hairline that was itchy and red. After that my hair started to shed. At first I just assumed it was normal postpartum shedding, but then it started coming out in clumps. Within three weeks, my hair was gone.”

“The first six months, I hit rock bottom. For women, hair is [part of] your identity…and I felt like I lost ‘me.’ I couldn’t even look at myself in the mirror. It was really hard to move forward, but I had no other choice—I have two little girls. [Alopecia may] not be life-threatening, but it’s mentally and emotionally threatening. I had a lot of bad days,” confesses Reitz.

Reitz visited a University of Michigan dermatologist and tried topical creams, steroids, and injections, but nothing worked. Eventually the doctor said there was nothing more that could be done.

Reitz was beginning to lose all hope, but Dr. Sarah Stierman at Dermatology Associates in Perrysburg assured her that “they would always continue to try.” Together they have tried new medicines, which have produced positive results in clinical trials, but so far have been unsuccessful for her.

After two years of attempting possible treatments, Reitz decided to take a break in order to “cleanse the body.” Reitz has come to terms with her disease. “I’m not on such an emotional roller coaster. I’ve accepted that I have it…and it has totally changed my outlook on life. It has allowed me to see the inner beauty more than just the outer beauty, to focus on the positive instead of always the negative.”

Reitz’s oldest daughter, Karsen asked her mom what was happening to her hair. “I told her what was going on. She asked it it would happen to her. I told her no…it’s sad and depressing.”

Almost 7 million Americans have this autoimmune disease. Reitz encourages, “Don’t allow it to define and change who you are. Hair doesn’t define you. If I could do anything to get my hair back, I would. I would take it back in a second. But I’ve grown and become a betterperson because of this.”

For more information, or to make a donation to the National Alopecia Areata Foundation, visit NAAF.org.

What’s your favorite activity to do with your family? Going on a bike ride.
Best holiday memory from when you were a kid? Christmas with all of my grandparents.
What’s your go-to activity when you have a few minutes to yourself? Read. I like motivational books and love stories!
Describe your life in five words or less. Inspired by many.
What is your favorite Toledo hangout? Bar Louie or Tekela.
Describe Toledo in a sentence? Toledo inspires many and accepts all.
Favorite place to buy wigs? Charming Wigs on Manhattan.