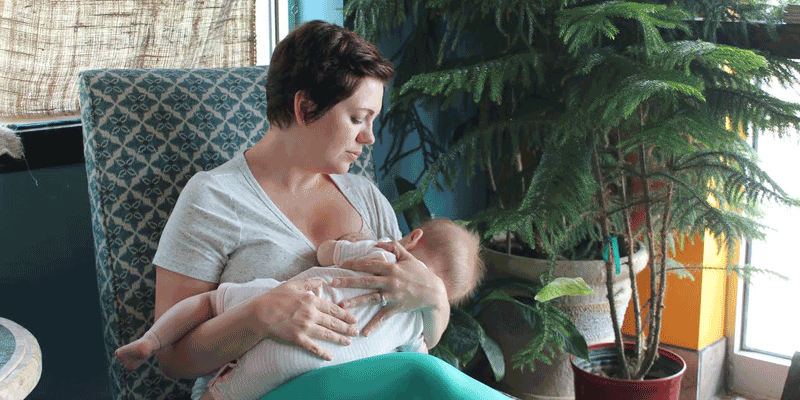 At the heart of mommy decisions is the breastmilk vs. formula debate, and no matter what a mother chooses, they are often subjected to the opinions of strangers. Toledo-area moms, from both camps, say they feel judged while feeding their babies in public.

Stephanie Castilleja breastfeeds her 18-month- old daughter Audrey, but often opts to nurse in the car instead of in a restaurant.

“Breastfeeding in public is controversial and I feel nervous about confrontation,” Castilleja said. “In restaurants, I feel like people can kind of stare at you more, versus a location where people are walking around.”

In March, a woman, who asked not to be named, made local news when she said she was asked to leave the Pizza Hut in Wauseon after breastfeeding her son there. Pizza Hut issued a statement claiming she was only asked to move to a different table, but they did apologize.

“There were a lot of comments that people were saying, ‘You know your baby’s feeding schedule, plan your outings around it’” said Kelly Allen, a Maumee mother of two. “I don’t know how cooperative other people’s babies are, but mine don’t run on a military regimen.”

Allen helped organize a “nurse-in” at Pizza Hut in response to the backlash. She said it was more about dropping the stigma surrounding breastfeeding in public than to protest what happened.

“None of us were there to be brazen. The last thing I want to do in a restaurant is breastfeed,” Allen said. “I don’t get excited about nursing in public. I just do it whenever my kid is hungry.”

Allen said the group did receive two negative comments during the nurse-in – one from an adult male and one from teen boys – but everyone else in the restaurant acted like it was not a big deal. She also said Pizza Hut was very supportive and accommodating.

Many businesses have demonstrated support for breastfeeding mothers. Imagination Station has a nursing room; Franklin Park Mall sports a family area with nursing stalls. The Toledo Zoo has a nursing room and a Mamava nursing pod.

Breann Yarnell said she had a very positive experience in the museum at the Toledo Zoo, at closing time.

“When they noticed I was nursing my son they were very nice, asked me if I was comfortable and to take my time,” she said. “My biggest fear seeing them come up to me was [that they would] make me feel ashamed for nursing him and tell me to do it elsewhere, but they didn’t and I’m thankful for that! I’m still very shy about nursing in public, so that helped a lot.”

These designated breastfeeding spaces may be used by a mother and baby looking for privacy or quiet, but some women  comfortably nurse in the open.

“I don’t care [about nursing in public]. I don’t want to make anybody uncomfortable, but I’m pretty discreet,” said Kimmie Clark, a Temperance mother of three. “My husband has seen people make comments or put up their menus, but I haven’t noticed. I don’t look for it.”

The social attitude toward breastfeeding has shifted over the last hundred years. Formula became the more popular feeding method starting in the 1950s, but in recent years the “Breast is Best” campaign have worked to normalize breastfeeding again.

“I don’t think there’s that many haters out there. I think it’s more a support thing. You just hear more of the bad stories,” she stated.

Does the movement lack a fair formula?

While the pro-breastfeeding push has made education and support readily available for moms who otherwise may not breastfeed, the movement does have its drawbacks.

Clark struggled with breastfeeding her now three-year- old son Emmett due to undiagnosed tongue and lip ties. She exclusively pumped and bottle-fed him for six months, but her supply was limited.

“The first time I had to give him formula, I cried and cried because I felt like such a failure,” she said. “It made my postpartum depression much worse. We are inundated with ‘breast is best.’”

Kristen Lee attempted to breastfeed all three of her children, but eventually switched to formula for each due to various problems. She says her family was very supportive either way, but she chose to formula feed because it was the best choice for her and her children.

But Lee has not been spared public criticism when it comes to feeding her babies.

“I was shopping on Christmas Eve and the (retail store) manager said she was going to turn the lights off [on me] in the bathroom,” Lee explained. “I was feeding Anna. [The manager] said that they needed to go home and that I could bottle-feed her anywhere.”

She said women have also approached her in the grocery store and told her breastfed babies have higher IQs and asked if she’d seen a lactation consultant. She also said she’s noticed women rolling their eyes or glaring at her while bottle-feeding.

Such incidences have made her less comfortable feeding her daughter in public.

“I feed her in bathrooms more often or try to wait until we get home,” she said. “I just hate the stigma associated with [formula feeding]. I don’t think that the pro-breastfeeding movement meant to have this reverse effect on formula-feeding moms, it just sort of happened. When we create special pods for breastfeeding, and special rooms for it, we send a subtle message that breastfeeding is the only way to feed.”

New moms receive a barrage of advice and unsolicited opinions when it comes to their children, and most will admit to feeling guilt or shame over some decision they’ve made, but Lee and others urge moms to not worry about the public.

“You should never be ashamed of feeding your baby,” Lee said. “A fed baby is best, and so long as your baby is fed, you are doing great.”

“[Breastfeeding is] so freaking hard by itself, even in the privacy of your own home. I don’t need to go in public and make it harder by trying to adjust my clothes and do it discreetly,” said Allen. “If you want to use a blanket [to cover up in public], do it, but don’t give someone a hard time if that doesn’t work for them because that’s them and their experience. This is you and your experience.”