Bobbi Johnson-Filipiak was in the best shape of her life at the time of her daughter Kate’s birth on December 11, 2012. Bobbi delivered by C-section to prevent complications from HELLP syndrome (a pregnancy complication involving the breakdown of red blood cells, elevated liver enzymes, and low platelet count). Because HELLP symptoms were still present two days later, Bobbi’s obstetrician ordered a brain scan to rule out injury.

In what turned out to be a life-saving error, the machine was mis-calibrated, and her chest was fortuitously scanned. Bobbi’s obstetrician discovered a small spot on her right lung, but assured her it was most likely a polyp. While a biopsy was the only way to be certain, there was no urgency, and Bobbi focused on her new baby girl. Six months later, a nagging feeling in her gut forced Bobbi to action. “You have to rule (cancer) out. I followed my instinct,” Bobbi said. The biopsy, done in June 2013, revealed NSCLC Stage III, a major form of lung cancer that can affect both smokers and non-smokers, like Bobbi.

The power of positivity:
fighting the fight

Resolved to remain optimistic, Bobbi geared up for intensive radiation and chemotherapy treatment from July-December 2013, all while juggling the needs of an infant and a full-time career as an HR executive. “Sometimes people victimize themselves, but that’s a horrible place to begin. You cannot let that be part of your thought process. Yes, you will have moments of weakness, but it is what you do after those moments that matters,” Bobbi said. Finally, on NYE 2013, 12 months later, came the highly anticipated call from her oncologist: All signs of cancer were gone.

Fast forward. After 18 months in remission, in mid 2015, routine scans revealed a recurrence. The cancer had metastasized through Bobbi’s lymph nodes to her kidney and brain, escalating it to Stage IV. Bobbi didn’t let the news unravel her, instead she immediately took action. She began treatment at the Cleveland Clinic in July 2015, as part of a clinical trial coupling chemotherapy with immunotherapy, a promising new treatment for advanced lung cancer. Bobbi remained optimistic. “I am blessed to have found it as early as I did. I am grateful I have cancer now versus 10, even five years ago. There are so many more options. It used to be that the life expectancy for Stage IV lung cancer was five years, but immunotherapy extends that. I don’t call it end stage cancer. With the right outlook and treatment I’m keeping my options open for the next advancement,” she said.

While most chemotherapy patients resign themselves to complete hair loss, Bobbi wasn’t interested. Research led her to cold cap therapy, a treatment based out of Europe only recently available in the US. The cap (-32 degrees F) is worn on the head for the duration of each chemo infusion, preventing damage to hair follicle cells. 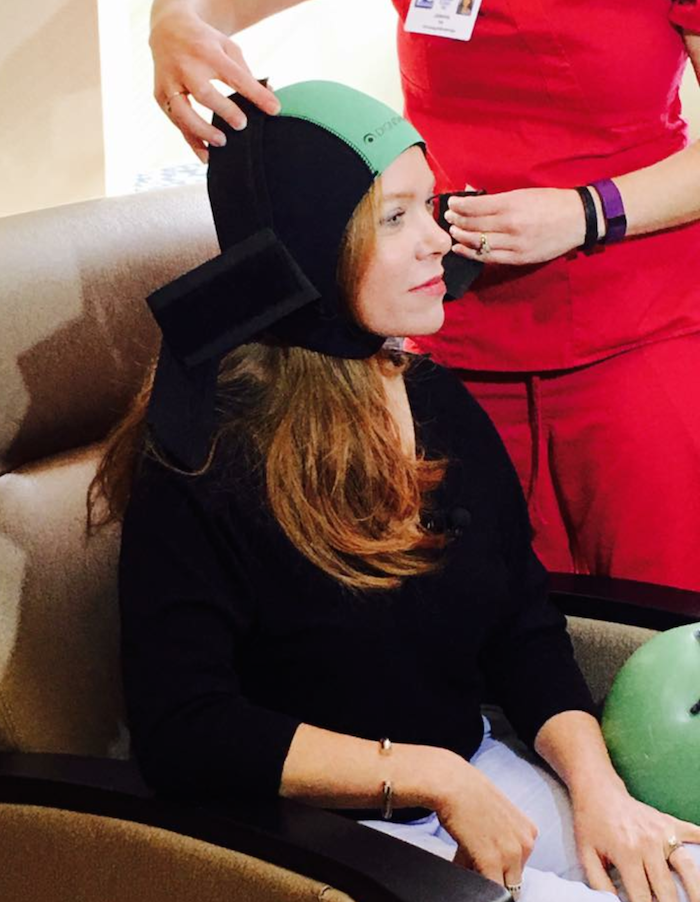 With this therapy, Bobbi has salvaged every gorgeous lock. “When chemo is knocking you down, why not have one major victory? To look in the mirror and see yourself, and your hair, that’s priceless. This gives you a chance to take control of something. It’s a boost of confidence when your insides feel like crap. It’s uplifting,” Bobbi said. (The Toledo Cancer Clinic is working to make the cold cap treatment affordable to all income levels, as insurance does not currently cover it.)

Still undergoing chemotherapy, Bobbi keeps her mind and body sound by incorporating exercise, nutrition, and holistic therapy such as Reiki, into her regime. She finds incredible strength in her husband James, and daughter Kate, now 4. “There’s no better incentive in life than looking at your daughter’s face and saying how can I not possibly give it my all? My daughter really is my inspiration. Kids, they know something we don’t. Life is a precious thing. I’m not going to let cancer define who I am. I feel like I can kick it…it’s a wake-up call to value what you have. Spend time with friends, spend time with family,” Bobbi said.

Bobbi wants to help others who find themselves in a similar situation. She is heavily involved with cancer advocacy and fundraising at The Victory Center, where she is on the Board of Directors. The Victory Center, a local resource for cancer patients and their families, provides access to many services, including yoga and art therapy. Support groups for family members who are grappling with a cancer diagnosis are also available. Learn more online

What’s your favorite activity to do with family?
We love taking family walks with our beagle.

What’s the best holiday memory you have as a kid?
Receiving a Lifesaver storybook from my great grandmother on Christmas Eve.

What’s your go-to activity when you have a
few minutes to yourself?
I’m an Amazon prime junkie… I love online shopping, especially this time of year!