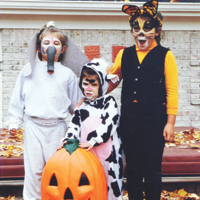 I love Halloween. As a mom it’s the only holiday where dust and cobwebs go with the decorations, eating large amounts of chocolate and baked goods are given a thumbs up and you can dress according to whatever happens to be going on with your body. That pretty much explains why I have been everything from a killer bee (pregnant), Cher (a rare moment where my stomach saw the light of day) to a “the honeymoon’s over” costume complete with bunny slippers, pore-cleansing face mask and fluffy robe (pretty self-explanatory).

Anytime you factor motherhood into the equation, it takes things to a whole new level and Halloween is no exception. My oldest loved to dress up, and her choice of costumes made this woman who breaks out into hives at the mere sight of a sewing machine a happy camper. My highly creative middle child on the other hand informed me one year she wanted to be an elephant. My youngest wanted to be “herself,” and is STILL miffed at me for making her wear the “cow” outfit complete with udders that I borrowed from the neighbors.

Personality study
I gained some valuable insights into their psyches every 31st of October especially in dealing with their “loot.” Lauren, in stereotypical first-born style, would arrange her candy with all the Snickers in a row, then the Hershey Bars, and so on, to determine the statistical probabilities and ratios of each. She would then make a graph to confirm her findings. The girl and recent grad is now titrating paralytic drugs as an ICU nurse. Helena would make pretty decorations out of her wrappers (her goal is to be a special ed teacher) and Maria would hoard hers in a secret hiding spot and was known to swipe the “good stuff” from her sisters and attempt to sell it back to them at a later date. She wants to major in professional sales.

Through the years we have enjoyed the hallowed eve with family and friends. I even survived the years of dressing two families in themed costumes. I was almost thrown over the edge when my ambitious friend Terry decided that if we were going to be dressed as people in the shower (loofas, shower caps and encircled by a shower curtain) that the look wouldn’t be complete without constructing individual showerheads. To this day I have an aversion to paper towel rolls and foil. My Mom gave her two cents worth and helped me slit the back of my “curtain” to reveal a set of fake “buns.” I totally forgot how I looked from behind until I stared into the eyes of a poor little trick or treater at my door after I bent over to give him some candy.

Monster bash
My kids will say (along with close to 100 neighbors, friends, and family) that our annual Halloween party is the best part of the holiday. As with most things in this house it started out as a small gathering and, as one friend put it, “it grew legs.” Even the most conservative guests, including my father, get into the spirit of things. For 364 days my dad is the former Eagle Scout, army man, entrepreneur we know and love but, just like a werewolf, he annually transforms into another form. Some of his most memorable transformations were as a Hawaiian dancer complete with coconut bra, cheerleader and, my all-time favorite, World Cup Wrestler, when he borrowed (as if I wanted them back) a pair of my tights.

Through the years we have had some eyebrow-raising moments including a middle-aged mother of three dressed as a Victoria’s Secret swimsuit model. We also had a former 6’7” college basketball player come dressed as a transvestite. I did not know where not to look first. The most upsetting costume to walk through our doors was worn by my daughter’s high school friend who came dressed as part of the male anatomy. We immediately removed him from the party and told my little confused godson that he was a giant “Twinkie.”

Some parting words of advice my pretties: make 100% certain that the person who you THINK is wearing an inflatable costume actually IS before making comments. Also, when you find yourself surrounded by kitchen clean-up helpers at 2 am all wearing tights (including Mr. and Mrs. Incredible, Robin Hood, and yes, even Rocky Horror dad) realize that you are one lucky witch.