Schools supply numerous resources to our children these days, including basic essentials like food. Thousands of children in our area are on free or reduced-priced meals, and many schools provide both breakfast and lunch. However, it’s a long stretch until breakfast, and during the summer months, those children no longer have dependable sources of sustenance from the school.

Filling in the gaps

Connecting Kids to Meals fills in the gaps for those kids. “We provide an immediate solution to an epidemic in this community— hunger. People don’t realize how many kids go hungry every day,” said Wendi Huntley, President.

Huntley describes Connecting Kids to Meals as a “hunger relief organization.” During the school week, the program provides dinners for thousands of children. However, on the weekends and during holidays, the need is greater. Huntley adds, “It’s a serious problem in the summer months; we have 17,000 kids who rely on those meals.”

“During the academic year, we partner with after-school programs like tutoring or chess club,” Huntley said. “We feed their little bellies so their minds can be fed.” 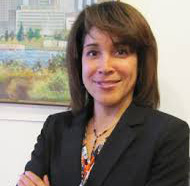 Huntley grew up in Toledo and attended Notre Dame Academy before studying at BGSU. She moved to Columbus to attend OSU College of Law and practiced law in our state’s capital for 25 years. Her work with hunger began when she “had an opportunity through church to get involved with hunger and homelessness.”

When she moved back to Toledo, she started working part-time with Feeding Lucas County, the former name of the organization, which quickly grew to full-time position where she urges recognition of the rampant hunger epidemic: “Our community hasn’t been able to bounce back economically like some other cities, and our goal is to reach as many kids who are struggling with hunger as possible. We’ve got to grow our footprint and the number of kids’ lives we can touch.”

The number of children on free/reduced-priced lunches is surprising. “Washington Local has 60%, Maumee has 33%, TPS has 80%, and Bowling Green has over 90%,” cites Huntley. “Rural areas, like Otsego and Anthony Wayne, are lower, but when 25% of the community is living in poverty, what are you to do when they aren’t as closely located to resources that can provide them with meals?”

Connecting Kids to Meals staff routinely hear heartwarming stories about the impact of their work. One story, from a single father of three in Bowling Green, Huntley recounts, “(he) came in with his three children during the summer. He sat to the side while the kids ate. When someone approached him, he said, ‘I’m just so grateful to know about this opportunity. I lost my job and i don’t know how I would have been able to feed them.’”

Huntley said it’s not only the unemployed who seek aid; the underemployed also require help. “Many are just making enough to pay bills. These are the working poor. You want to feed and provide for your kids, but you need to keep a roof over your head and pay bills at the same time.”