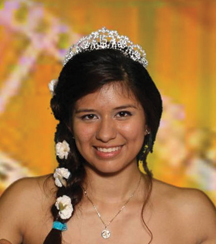 Alencia Loredo is a typical high school sophomore at Central Catholic. She worries about grades, looks forward to Homecoming and doesn’t go too far from her phone. But for one special day last summer, Alencia was a princess as her family and friends celebrated her Quinceanera, the marking of her fifteenth birthday and the symbolic beginning of womanhood. Alencia was marking this special event as many Hispanic girls do in Mexico, Puerto Rico, and Central and South America, with several activities that highlighted God, family, friends, music, food, and dance. As her mom, Richelle Geronimo-Angel described it, “Even though we don’t live in Mexico, I wanted her to experience something that carries on our traditions.

The day started with a Mass at Immaculate Conception Church. Alencia, in a white dress, was escorted down the aisle by her parents. She was met at the altar by Reverend Paul Kwiatkowski, who had baptized her as an infant and had given her First Holy Communion, who guided the renewal of her baptismal promises, offering a special prayer of dedication. A guitarist played Mexican music, and members of her family presented gifts of special significance, including a rosary and a Bible, a tiara to mark her as a “princess” in the eyes of God, and earrings, with the hope that, in tough times and periods of doubt, she will always hear the Lord. Fourteen of her friends, with male escorts, served as a Court of Honor, acting as witnesses to her public coming of age.

The celebratory dinner also included plenty of symbolism. The Court of Honor performed special choreographed dances, which they had learned through several months of lessons, and Alencia had a special dance with her father, after changing her shoes for high heels—a symbol of her transformation from a little girl to a young lady. She received other special gifts from guests, including her “Last Doll,” a nod to the toys a young woman leaves behind. The youngest guests enjoyed candy, a photo booth and dancing to Mexican music.

Alencia’s big day was made possible by the support of her friends and family. Padrinos, or sponsors, helped to pay for everything, including beverages, flowers, music, hall decorations, her hair and makeup, even the limo. “This was a big step in life for me; I was the first girl in my family in this generation to have a Quince. The best part of my celebration was seeing all my family come together at the ceremony and reception. It made me feel special!”