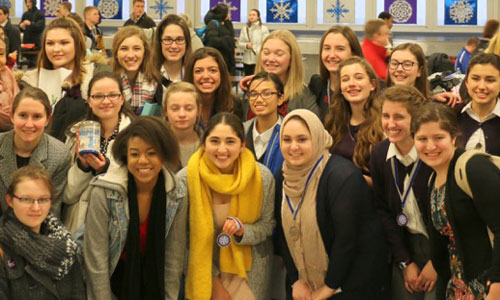 Dave DeChristoper, teacher and speech coach at Notre Dame Academy and Creative Director at the Toledo Repertoire Theater, earned his first diamond from the National Speech and Debate Association this year. DeChristopher, excited as a theater, drama, and speech enthusiast since his high school years, is also very humbled. “As a speech coach, I get to nudge the girls in a certain direction, however (their performance selection) is their own and they have total ownership over it. It’s exciting to see where they take it.”

Dave has served as the assistant coach for the Notre Dame speech and debate club for the last eight years, after his long-time friend and head coach, Trish Sanders, asked for his help. Some years they have as many as 100 students on the team.

The last week of February marked the end of the season with 26 young ladies competing in the state championship. Under Trish and Dave’s leadership, the students reached 7th overall out of 100 competing schools.