No matter how we become mothers, we can all agree on two things: one, motherhood is hard, and two, every mother’s love for her children is special.

Three Toledo-area mamas discuss their journey to motherhood. One is hoping to add her foster child to their forever family, another added a young boy to her family after their biological children were grown, and another had motherhood thrust upon her at a young age (and wouldn’t have it any other way). 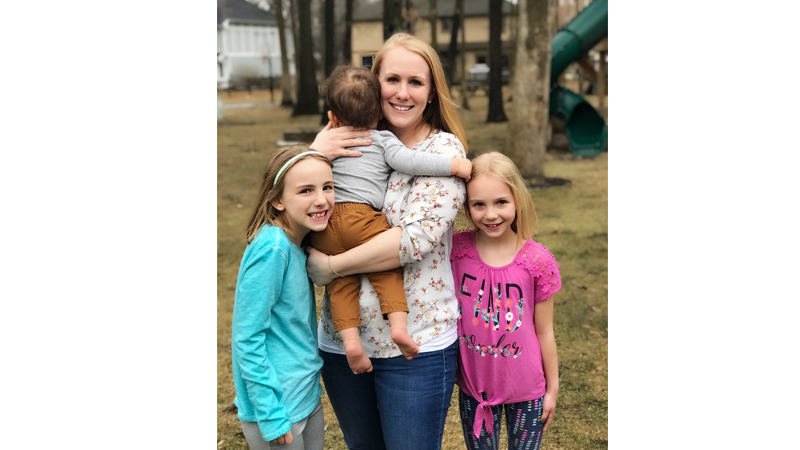 Melissa, her two daughters, and their foster son (dad is taking the photo)

Melissa and her husband have two beautiful, biological children together, Ryleigh (9) and Sydney (7), but Melissa explains she always had a “burden on her heart to foster,” and as her children grew older, that “tug did not go away.” She approached her husband about fostering children, and to her surprise, he replied that “he felt like it was something they were supposed to do.”
After the time-intensive screening process, Melissa and family received “the call” within a few weeks: a newborn baby girl, who stayed with them for only 6 weeks before the baby’s biological grandmother gained custody rights.

In January of 2018, Melissa explains, “We got the call for the little guy we have now, and we absolutely love him like our own son. That’s been a cool thing with being both a biological mother and a foster mother: the love we instantly felt for this little boy was no different than our feelings for our biological daughters.”

After more than a year together, Melissa would love if the 18-month old baby boy (whose name we cannot release) can join their “forever family,” but she clarifies, “With foster care, there is no guarantee that fostering will turn into adoption….It’s an emotional roller coaster. We would adopt him in a heartbeat if that’s what was best and needed for him, [but] the main goal [of the foster care system] is reunification with the biological family.”

“I don’t know any way to shut off my heart from loving them with that full mother’s love,” admits Melissa. “You hear and see things–as far as the biological family goes–and it’s hard not to sometimes question, ‘How can reunification be best for the child?’”

For those considering fostering, Melissa urges, “If you have that tug on your heart, fostering has been so worth it. There’s a lot of heartache that goes along with being a mom to a foster baby, but the joy surpasses that. Even if our little guy isn’t with us forever, we can’t imagine him not being a part of our family forever…even if he’s not with me every day. As the saying goes, ‘everything worth doing has risk to it.’”

Amy Northrup: From biological parent with grown children to mom of a toddler by adoption 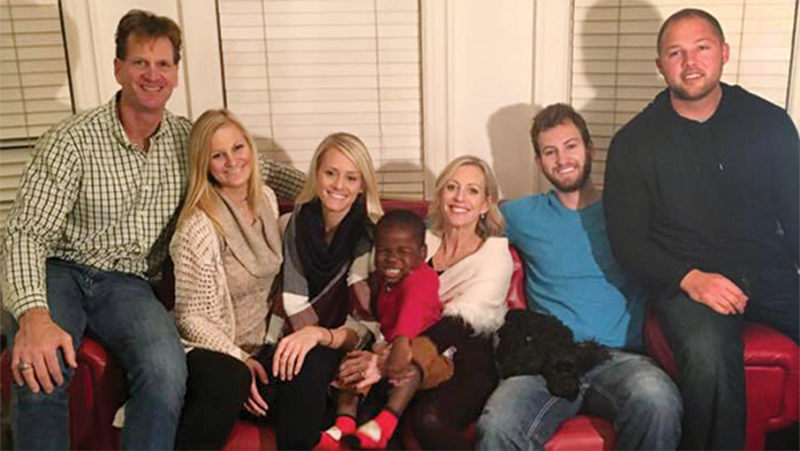 Amy Northrup thought her days of watching young children were over. After all, her three biological children are grown: Abigail is 30, Tripper 28, and Victoria 26.

However, life had different plans for the Northrup family. As part of their church’s mission work, they accepted a young boy from Africa into their home in order to help him with medical needs. Yvan, who was just a toddler at the time, was born with clubbed feet and needed multiple surgeries/casts to correct his feet and allow him to walk.

Amy reminisces, “He was with us for about 9 months, and then he went back to Africa, [which] was heartbreaking. We were under the impression that he was going to have a life over there, and we knew that he was never ours…we just hoped he would remember us.”
However, Yvan returned to a single mother who “couldn’t raise him.” She adds, “Yvan got malaria, and his mother wasn’t getting the medicine for his malaria [because] she had spent all the money and used all the provisions we had sent them.”

Long story, short, Amy says, “The mom asked us to raise him.” Originally the plan was for another family in their church to adopt Yvan, but that family had foster children and received the opportunity to adopt siblings, and “they thought adding another child would be too much.”

Amy recalls, “We found that out and sat on it for about a month. Then our house burnt down. It was like God slapping us in the face, saying ‘If you have to do this, you can do this.’ We figured if we could handle our house burning down, then we could handle raising another child. He had been through enough in his short little life and we didn’t want to add more trauma to his already difficult childhood.”

The Northrups adopted Yvan when he was 3–he’s now 6–and starting over again has had it’s challenges. Amy admits, “Knowing what I have ahead of me is hard because it’s easy now. ‘Little kids, little problems. Big kids, big problems.’”

“All my friends, they sleep in, they do what they want to do. Now I’m back at ground zero–I’m looking for a babysitter, and I haven’t paid a babysitter in so many years! Even the rules at school are different, and Yvan goes to the same school my kids went to. But God gives you something for a reason. You kind of have to take an easier attitude…it is what it is. And Yvan is a labor of love…he’s a gift.”

Alaa Mahmoud: From aunt to mother 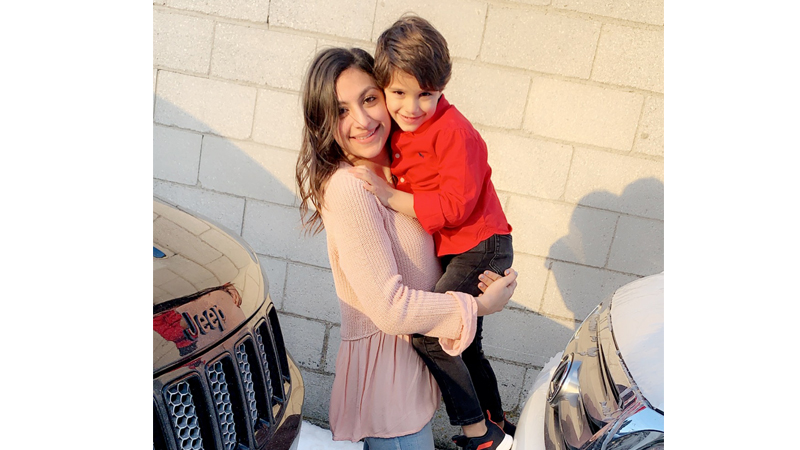 Alaa, who is only 20 and an education major at the University of Toledo, admits that after taking on many of the parental duties for her 6-year-old nephew, Ibrahim, she hesitates about wanting kids of her own. She laughs, “Honestly, to tell you the truth, after getting a feel for what you need to do and how you need to do it, I don’t want to do it all over again! Someday maybe I would, but I’m definitely not in any rush.”

Alaa’s brother, Yousef, and his ex-wife divorced shortly after Ibrahim was born. Ibrahim’s mother moved to Minnesota, leaving Yousef with all of the parental responsibilities. Yousef and Ibrahim moved back in with his parents (Ibrahim’s grandparents) and, Alaa explains, “Out of necessity, I became Abe’s mom. I didn’t sign up for this, but I wouldn’t change it.”

“[Abe’s biological mom] gets him for holidays, but she only comes and gets him when it’s convenient for her, so she only sees Abe about two weeks out of the year,” confesses Alaa. “Yousef works a lot, from about 4PM to 2AM, but on his days off, he spends all of his time with Abe, and he helps as much as he can when he’s home…but he doesn’t have time to be with Abe 24/7, like any other father trying to make money for his family.”

Alaa and her mom, Ibrahim’s grandma, share traditional mother duties, but Alaa explains, “My parents are getting older, and it’s hard for [my mom] to get up in the morning. She did that for years with six kids! She doesn’t need to do that with another kid.”
“So instead of sleeping in, I get up and do it,” Alaa continues. “I get Abe up in the morning, shower him, get him ready for school and on the bus or sometimes drive him. I put him to bed at night. I do all the school stuff, I went to his last conference because my mom was on vacation. I’m the one that keeps in touch with Abe’s teacher. My mom has five boys of her own and helps my dad with work, so she can’t do it all.” 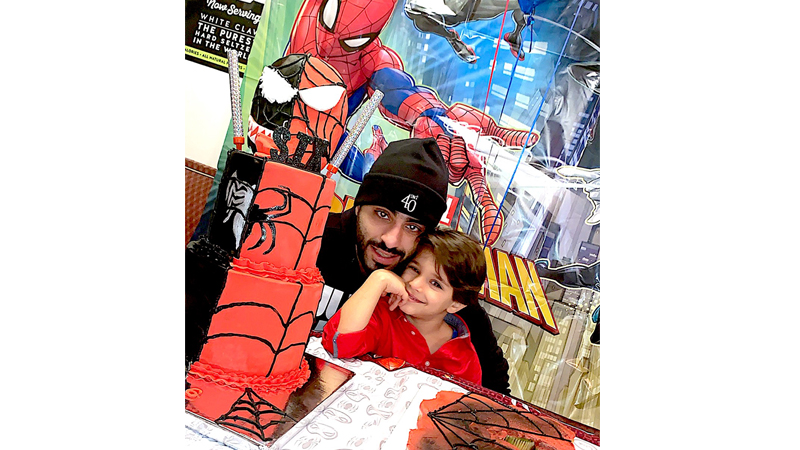 Ibrahim and his dad, Yousef.

Assuming the role of mother has forced Alaa to mature faster than many of her peers, and despite realizing that motherhood is “a lot of hard work,” she says, “It’s all worth it in the end….watching him succeed and do well, seeing when he’s being good and bad, and watching him grow. I like looking back.”

“It’s different when you have your own kids, but it doesn’t matter if it’s your own kid or your family member or a child through adoption, it’s all the same amount of work…and it all requires so much patience,” reflects Alaa. “In the end though, you have someone you helped raise. You see all of your hard work in that one person.”