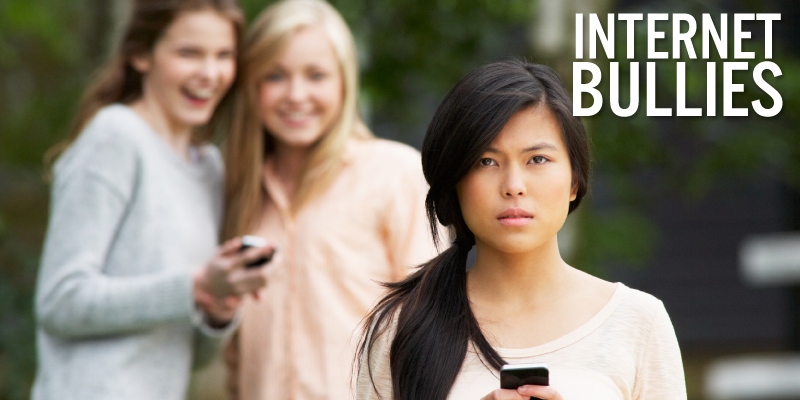 Bullying in the schoolyard isn’t new. But parents today have to worry about kids being bullied online, too. In the past year, many communities and schools report an increase in the number of incidents in which children are harassed because of gender, race, ethnicity, sexual orientation or political point of view. According to Stopbullying.gov, 49% of children in grades 4 to 12 have experienced bullying, and 30% admitted to bullying others.
Like old fashioned bullying, cyberbullying involves a willful, repeated effort to humiliate, harass or threaten another person. Unlike traditional bullying, cyber attacks use technology like text messages, social media, apps or even the chat option on video games.

Cyberbullying is different from traditional bullying in two ways. First, there’s no escape. Technology follows kids home and even to another school. As soon as a child logs on, insults, slurs and hate become vivid again. Second, nothing disappears online. Taunts that would have been forgotten at the end of the day can resurface at any time. Young people can be truly traumatized if their most embarrassing moments go viral.

Now more than ever, parents need to stand firmly on the side of decency and kindness. By setting clear household rules, you can help your children develop the self-control that keeps them from making someone’s life miserable. Here are other ideas about how to combat bullying online:

Delay social media access. Middle school students are especially vulnerable to bullying because they are trying to figure out where they fit socially. Often they form very strong ties to a particular peer group, and they can be insensitive, intolerant or even cruel to people outside that group. Keeping kids away from social media until they have better social skills makes sense, though it isn’t easy if “everyone” has a smartphone. “Wait Until 8th” is an effort to create support for parents who don’t think smartphones are necessary in middle school. Started by a Mom in Texas, the program encourages parents to band together so teens don’t feel like the only one without a phone.

Avoid anonymous apps. Being anonymous seems to encourage cruelty. The most recent example is an app called Sarahah, a word which translates as honesty in Arabic. Originally intended as a way for employees to provide constructive anonymous feedback to employers, the app has degenerated into a place where people feel free to say all the horrible things they would never say face-to-face. For teens and pre-teens, the feedback can be devastating. Anonymous apps are cowardly. Make them off limits.

Enlist artificial intelligence. The survey by Reportlinker found cyberbullying was most likely to occur in text messages and social media accounts like Facebook, Instagram, Twitter and Snapchat. Supervising these environments isn’t easy, unless parents turn to software like Bark (www.bark.us). This new app uses artificial intelligence to scan communications for slang and other clues associated with bullying, grooming or harassment.The app also gives parents advice about how to intervene constructively. Bark offers a 30-day trial free and then charges $9 per month.

Say no to roasting. Are insults funny or, well, insulting? That’s the question you have to ask about a new fad called roasting. Kids voluntarily post a photo or video with the hashtag #roast me. Sometimes what they get is good-natured joshing. And sometimes they get ripped to shreds. A child who asks to be roasted is hungry for attention and probably needs better outlets.

Discuss real world consequences. Sometimes kids— and adults— use the concept of free speech as a justification for messages that denigrate or disparage other people. Although free discussion of ideas and opinions is at the heart of democracy, it should always be done with respect. Children need to understand the difference between healthy, even heated, debate and attacks on people for who they are or how they look. People can— and often do— change their minds when they are exposed to better ideas.
Because of hateful posts, young people have lost jobs, scholarships, college acceptances and athletic opportunities, not to mention friendships with people who find such views offensive.
Perhaps the most important thing parents can do to counter bullying of all kinds is to raise children strong enough to be compassionate, curious, constructive and courageous instead of critical, condescending, cowardly and cruel. To do that, all of us have to aspire to be models of what we hope our children will become.