Nice atmosphere. Delicious food. Great music. After stopping in for dinner, I was feeling guilty I wanted my return visit to West Side Bistro to be kid free and with some fun friends. I have since ditched the guilt and made plans to have an adult night out in the near future!

It’s true. Most restaurants these days are able to accommodate guests with children in tow; as it has been the growing trend for people to bring their children just about everywhere with them. Times have certainly changed. Being the youngest of six children, getting Burger King was a big deal. My children, however, are no strangers to restaurants. Then again, look what I do?

All that being said, sometimes you might just have a more enjoyable time with a group of adults and leave the kids for their own night of fun with the sitter. After all, an occasional break is good for everyone. West Side Bistro opened in January and is owned by Stan and Sherry Burton, and managed by Brian Gump; who has owned and managed many restaurants in his time. Though they have two high chairs available, Gump said their clientele is usually an older crowd.

If you didn’t know it was located in the strip mall, you may just miss it. With its frosted windows and covered patio, you would be hard pressed to guess it was nice inside. But once inside, you’ll say “Wow, how’d I miss this?” 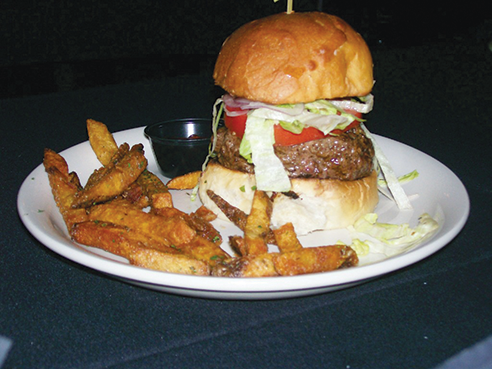 We were there early on a Saturday and my kids and I certainly felt welcome. However, they didn’t offer a kids’ menu and if you have little ones, you won’t find kid friendly cups or changing stations in the restroom.  My boys split one of the burgers and fries. It was a generous portion and delicious, but at $11.50 plus drink, I was glad I had two children that could split the meal and the cost. The kitchen had divided the meal in even portions on two plates without my asking. The thoughtful gesture was certainly noted.  Artisan flatbread pizzas would have been another option for them to share.

We began our meal with calamari because it’s our family rule to try it everywhere we go. The breading and their signature sauce was yum, and gone as quickly as it hit the table. “It’s an eclectic menu, definitely,” said Gump. Not only are the appetizers unique, such as duck wings, chicken livers, and green beans tossed in a Szechuan sauce and peanuts, but so are the entrees. They offer burgers, salads, steaks, and a variety of fish and pasta dinners. I highly recommend the lobster fettuccine but I’ll have my eye on the pesto and shrimp rigatoni when I return.

The kids and I had ventured out to dinner around 6pm to not make it a late night for my already exhausted boys. But just as we were heading out, many guests were streaming in and the musicians were preparing to start playing for the night. I LOVE music and I was so bummed to be leaving just as the fun was about to begin. Ahh.. next time.

According to Gump, Tuesdays are blues night, while Thursdays are jazz and Fridays and Saturdays are a mix of music. It appeared many of the people coming in had been there before and obviously knew what time to roll in so they could enjoy the music during and after their meal. I know for next time. There is also ample bar seating if you choose to stop in just for the music and not make it a big dinner out on the town.

Bottom Line: Though West Side Bistro is most likely not the first place you’d choose to drag your little ones, they will certainly accommodate you if you do arrive with them in tow. If you love music, you might want to time it right. Evenings out sans kids can certainly help maintain parental sanity.

Karen Zickes is a mom of three active children and freelance writer who resides in Holland, OH. She can be reached in
c/o editor@toledoparent.com