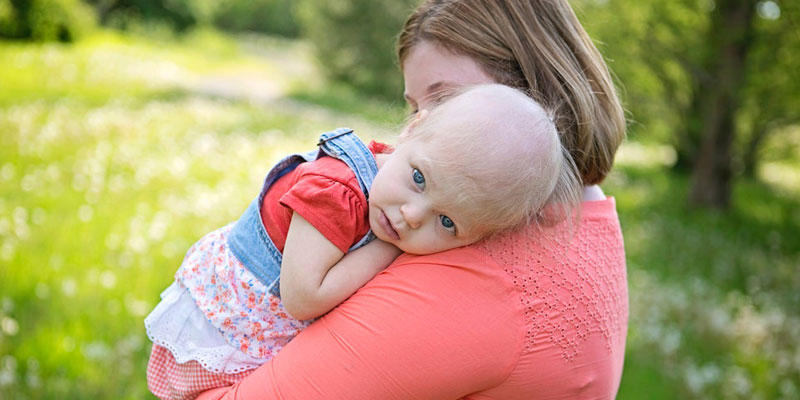 Ava Wegrzyn turns 4 on June 4, 2016. Yet, at this tender age, she has endured seemingly an entire lifetime, a remarkable journey of strength and courage against childhood cancer.

Her life will be forever changed by her struggle, but today she thrives with an intense love of life and the support of her family and the community. Ava’s mother, Jenny, shares this heart-wrenching perspective on her daughter’s unbelievable battle.

Something Was Very Wrong

Jenny Wegrzyn began to notice unusual symptoms in her youngest daughter, Ava, when she was about 15 months old. Out of nowhere, the toddler began waking up crying in middle of the night, developed a finicky appetite, and seemed to always run a low-grade fever. When Ava began to have “staring spell” seizures, where she would stare off for 30 seconds or so before snapping out of it, it was time to take action.

Blood-work indicated anemia, a condition where not enough healthy red blood cells are available to carry adequate oxygen to body tissue. Usually easy to correct with iron supplementation, Ava’s case was stubborn. A month later, with no change, Ava’s doctor made a startling discovery— a mass in her abdomen. Ultrasounds revealed a 10 cm tumor growing on her liver.

Ava was admitted to Toledo Children’s Hospital where Jenny spent a life-altering night in the hospital with Ava and her older daughter, Ellie, awaiting the results. It took all she had to remain strong for her girls. “I still remember the darkness, the smell of the room, the feeling of wanting to crumble to the floor because your world is falling apart. But, my two kids were there. You go into survival mode. It still feels surreal, like a hazy nightmare,” Jenny disclosed.

Ava’s doctors had to find different ways to administer chemotherapy treatments to the young patient.

A Diagnosis that Stopped Time

Doctors confirmed hepatoblastoma, a rare form of liver cancer that usually affects children under age 3, as the cause of Ava’s tumor. Within a week, the Wegrzyns were at Cincinnati Children’s Hospital under the care of Dr. James Geller. “We just wanted to do something. Every day that went by, this thing got bigger and took hold of her. As soon as we contacted Dr. Geller, he told us to come down that night to get admitted for further testing and a liver biopsy,” Jenny revealed.

Dr. Geller laid out the necessary course of action: They would proceed first with chemotherapy to shrink the tumor, and then operate to remove the affected portion of Ava’s liver. “Within a minute of beginning her first chemotherapy treatment, Ava had an anaphylactic reaction. Her oxygen levels dropped, she had a rash covering her body, and her heart rate increased. The chemo was stopped and Ava was stabilized. Dr. Geller came up with a way to desensitize her to the drug, administering what would normally be a two-hour infusion over the course of 10 hours.”

This time, everything went well. “It was all pretty overwhelming. You’re thrown into a world that you know nothing about. You quickly learn lots of things that you don’t want to learn, but it’s your kid and you do anything for them,” Jenny said.

Ava and her family celebrated and looked to the future.

The Fight of a Lifetime

Returning to Toledo, Ava completed two rounds of chemotherapy over six weeks, then travelled to Cincinnati Children’s Hospital for scans. By then, she had lost most of her hair. “That was hard because it’s just one more realization of what is going on; now it’s an external reminder. Everyone you come across knows what it means,” Jenny expressed.  Dishearteningly, the tumor remained too large for surgery, and Ava was forced to endure two more rounds of chemo. “We wanted it out of her but we also wanted to give her the best chance of no reoccurrence.”

Finally, after four rounds of chemo, the tumor had shrunk to an operable size. Surgery to remove the tumor, along with the affected portion of the liver, was scheduled for June 2, 2014, just two days before Ava’s second birthday. Jenny and her husband, Ken, waited anxiously during the 13-hour operation.

“The surgery staff called hourly and gave us updates as to how things were going. Once they got in, they found that the tumor was more invasive than expected. They had to take about 70 percent of her liver. We felt so lucky that they were able to get it all out. If they had realized how much was compromised beforehand, they probably would have done a (liver) transplant,” Jenny confided.

Ava slept through the following night in the ICU. “I will never forget that image— she was intubated, on a ventilator, they had to restrain her hands, she had a central line in her neck and a port in her chest, a nasogastric tube, urinary catheter and a drain at the surgery site. My husband and I took turns sleeping next to her bed. She woke up the next morning and opened her eyes. I was holding her hand. She was scared (and) didn’t know what was going on. Tears were running down her face because she was still intubated, and she couldn’t talk.”

A healthy Ava with her mom, Jenny.

“Slowly, over the next few days, the wires and tubes came off; by her second birthday Ava was allowed liquids. She got to have a Popsicle and I was able to hold her. After two weeks of recovery, she was a whole new kid. Once home she was talking and eating better, and was much happier,” Jenny enthused.

Not out of the woods, Ava endured two more rounds of “mop-up” chemo to eradicate any remaining cancerous cells. “The last round was the toughest round on her,” said Jenny. “We explained to Ava the bad stuff growing in her had to come out and that’s why we needed to keep going back.”

Ava’s chemotherapy treatment was finally complete on July 31, 2014. Ava has been cancer-free since, but she must be checked for recurrence on a regular basis. Maintenance for Ava consists of ultrasounds, chest X-rays, and labs at regular intervals. Jenny confides, “This is our life and we know there is always a possibility [that the cancer may return], but you can’t let it consume you. She’s a tough cookie. She knows what she needs to do and she does it.”

This spring, the family of four travelled to Disney World on a Make-A-Wish trip for Ava. “Ava loves her princesses— Belle is her favorite. My daughters have both been through so much, even Ellie, having to take a step back and not get the full attention that she deserves,” Jenny shared.

For more information about childhood
cancers including hepatoblastoma, visit the
American Childhood Cancer Organization at acco.org.