In a world that is obsessed with GPA’s and touchdowns, it is hard for many students to find a creative outlet. For St. Francis de Sales High School, supporting the arts includes a focus on their spring musical productions.

Recognized in the city for their large sets and even larger dance numbers, this year, they add a deeper emotional component. For his 19th production at St. Francis de Sales, Musical Director, Michael Kastner, chose Big Fish from a list of 38 possible shows to perform this year.

“There is something very special about this show. People will relate to it,” explains Michael Kastner. “It’s about life— about what each one of us goes through at the different times in our lives.”

Big Fish started enchanting audiences on the page, with the book the film and musical are based off, titled Big Fish: A Novel of Mythic Proportions by Daniel Wallace. The film premiered in the year 2003 to positive reviews, and starred Ewan McGregor and Helena Bonham Carter. Ten years later, the musical premiered at the Neil Simon Theater in New York City.

Big Fish tells the story of Edward Bloom who is struggling to separate his father’s stories from fact and fiction. While on the brink of starting a family, Edward’s father becomes deathly ill. In an attempt to receive closure Edward decides it’s about time to learn the truth about his father’s life, which happens to be filled with witches, giants, and mermaids.

The SFS cast has been hard at work preparing for the show, even performing on 105.5FM and at the Franklin Park Mall. The students are hoping to top last spring’s production of The Little Mermaid. Similarities can be seen through the magical nature of both these stories, but they both have a drastically different story and tone. One describes love and self discovery, while the other tells of fixing relationships with loved ones.

“I usually play the larger-than-life characters. It is harder to act in a more serious role,” says Anna Birkemeier who plays Sandra Bloom, the love interest to Edward. 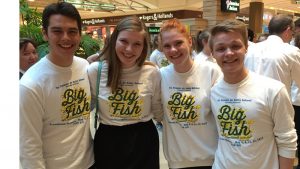 The story of Big Fish shows the importance creativity can have in our lives, and how these simple stories can form a deeper connection with family and friends. The cast hopes to touch the audience with their enthusiasm, and show that creativity is alive and thriving in our local students.

Kastner says, “People may not recognize the title, but I promise you people will not be disappointed.”