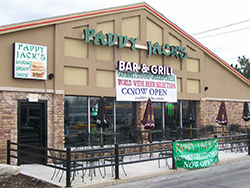 My husband said he never saw people eat so much cheese until he met my family. I guess it’s in the genes. Two of our three children consume cheese in any way, shape, or form. My finicky teen likes it strictly on sandwiches. I was certain Paddy Jack’s, the home of gourmet grilled cheese, would be enjoyed by all. And for adults, there is the added bonus of a beer selection from 11 different countries.

So just who IS Paddy Jack? Well, Pat Hyland (aka Paddy Jack) is an Irishman who has been producing fabulous cheeses for over 17 years in Ireland. That is his passion, and his attention to detail and the quality he provides his customers does not go unnoticed. From him, the local owners of Paddy Jack’s adopted their mission and were inspired by his passion. They aim to bring their customers a wonderful experience, just as Paddy Jack had done for years in Ireland.

My family visited the Paddy Jack’s on Central Ave. The griddle is one of the focal points of the restaurant and patrons have an up-close look at their sandwiches being made. There is a rectangle bar in the center and a second one with alluring blue lights set back in the corner. The kids enjoyed the high top tables because they could have a bird’s eye view while eating. Between that and the 36 TVs, they were occupied.

Paddy Jack’s opened a second location in Sylvania on Main St. in April, and a third location will open in August next to Legacy Golf Course at exit #5 off Rt. 23. “The ultimate goal is to franchise,” said general manager Jen Hurst.

Unique any way you slice it

No one is denying the fact some of Paddy Jack’s awesome sandwiches and appetizers may not be endorsed by the American Heart Association. But hey, sometimes they are the only thing that will squelch a craving. On the other hand, customers interested in lighter fare will be happy to know there are nine salad options on the menu as well as soups; so everyone is going to find something that appeals to them.  According to Ms. Hurst, you can even say “hold the cheese” on anything you order.

So how does one come up with the more unique sandwiches you have never dreamed of enjoying? “Honestly, we just brainstormed and did a lot of experimenting,” said Ms. Hurst. They must have experimented a long time because there are 34 sandwiches on the menu. My youngest enjoyed the grilled cheese and fries kids meal for $3.99. With drink included, that’s a good deal. It’s no surprise, then, that other families with little ones were out enjoying a meal at Paddy Jack’s the same evening. My older son was in the mood for the chicken chunks and my teen devoured the Turkey Jack with fries for $9.99.

I on the other hand, went for the sandwich that rattled off the longest list of ingredients, to delicious effect. The Memphis Mac is one of their most popular specialty sandwiches, loaded with provolone and Swiss cheese, BBQ pork in Memphis sauce, and topped with mac-n-cheese and caramelized onions. I obviously had to take half my meal home for the next day.

Other sandwiches include unique options like the Loco Jack that has crushed Doritos as one of the ingredients, or the Roasted Vegetable that includes zucchini, eggplant, yellow squash, carrots, sun dried pesto and Havarti and goat cheese. Yum. The list of mouthwatering options rambles on with the next option sounding better than the first. But don’t worry if you or your family are not the adventurous foodie types, you can still find something slightly more “classic” on the menu. We also loved the hearty bread that was toasted to perfection with each sandwich. The choices include sourdough, rye, nine grain, or asiago cheese bread.

I’m sure the desserts would have been tasty as well, but after the onion ring appetizer and our filling meals, someone was going to have to roll us home. There’s always next time.

Bottom Line: You don’t need to have an ounce of Irish blood to enjoy Paddy Jack’s. If you appreciate unique sandwiches and tasty appetizers or salads, you and your family will love Paddy Jack’s. Gather as a family, or stop in with your friends. It’s definitely a place for all ages.

Karen Zickes is a mom of three active children and freelance writer who resides in Holland.
She can be reached in c/o editor@toledoparent.com.