Did you know “Lima-style pizza” is a thing??? That was news to me. My neighbor who grew up in Lima began talking about the new Beer Barrel Pizza and Grill and said she’s never found a place in the T-town area that has pizza just like in Lima, Ohio except this place. That meant the pizza posse was on the move, and we added another family to the group.

Kid-friendly: Yes.
To avoid wait: Before 5:30p.m. Weekend waits can run over an hour during peak times.
Noise level: Very loud during peak times.
Bathroom amenities: Changing stations in both restrooms.
High chairs: Yes.
Got milk? Yes.
Kids’ menu? Yes.
Allergies? Gluten free crust and cauliflower crust available. No peanut oil used. Special procedures to mitigate any cross contamination, but understand if you have a severe gluten allergy, dough is made from scratch and there is a lot of flour flying around. 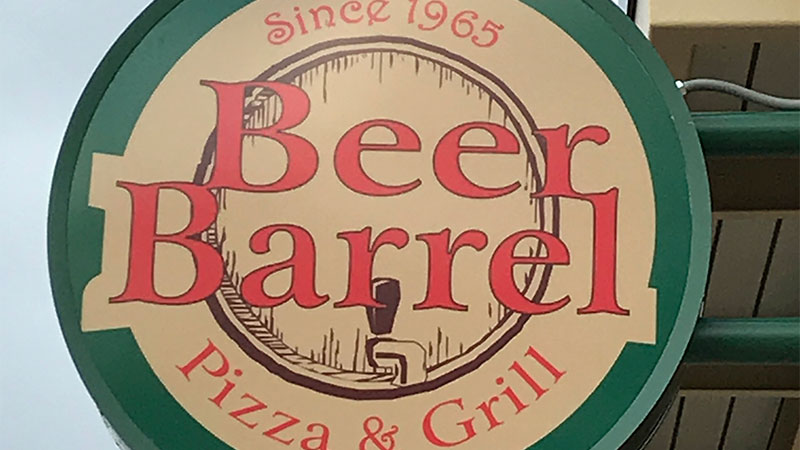 A barrel of fun… but loud

Eleven of us in the pizza posse met up on a Wednesday evening. Beer Barrel doesn’t take reservations, or call ahead seating, so we waited about a half hour to be seated. Weekends can run over an hour of wait time. Our 6:30p.m. arrival found the place packed…and LOUD. I suppose the acoustics of the open ceiling as well as the fact that every table was full made it extra noisy. We didn’t mind hanging out around the wood burning fireplace near the entrance though. I loved the aroma of the wood fire throughout dinner as well. The décor was a bit rustic while the Tiffany lights above the booths make for a quaint touch.

Seated at a long table the dining area was still so loud that you could really only talk to the person sitting right next to you, until the place started clearing out around 7:45p.m. On the flip side, if you want to bring the little ones with you there will be no worries that they might be too loud. Very family friendly, we did have a barrel of fun together there.

Beer Barrel, a local hole in the wall with great food, opened in Lima in 1965. In 2008 John Heaphy and his son Tony bought the original building, adding a second location in 2009. Jump to 2018 and they have six locations spread out between Toledo and Hilliard, outside of Columbus. According to Mr. Heaphy they opened in The Shops At Fallen Timbers in December and have been welcomed by the community.

Aside from the great pizza, General Manager Kelli Spindler also thinks it’s the atmosphere, fun and energetic staff, and diverse menu that keep people coming back. Yes, the menu offers much more than just pizza. 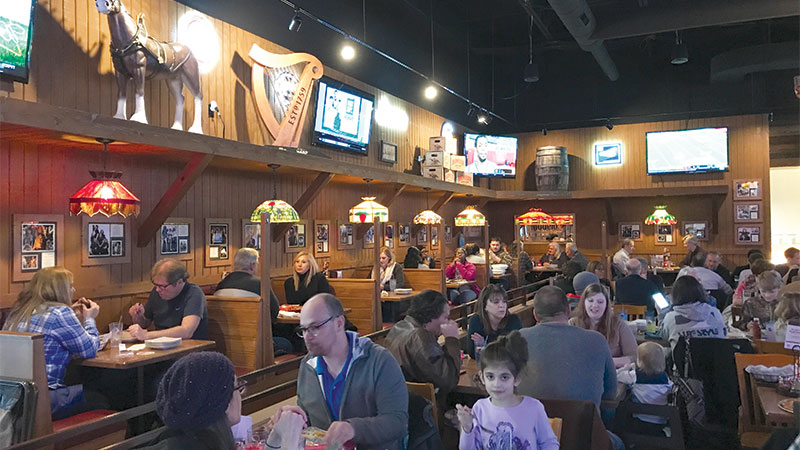 Pizza a plenty and more

Let’s first discuss “Lima style pizza.” According to Heaphy, it’s square cut, with toppings under the cheese, not too thick and not too thin. “That is the original style pizza since 1965,” said Heaphy. And yes, the crust WAS different from many other pizza places.
The pizza posse devoured the thin crust and deep dish style pizzas, as well. The sweet and spicy, pulled pork pizza was a delight, topped with fresh cilantro, while the roasted eggplant vegetable pizza was unique and flavorful. We also enjoyed ol’ stand by pepperoni pizzas along with vegetarian pizzas, and even personal size pizzas, which are a great option for kids.

Though I have never met a child who didn’t like pizza, they do offer a kids’ menu for those 10 and under, with items at only $4.99. Choices included creamy mac n cheese, a chicken and noodles meal with mashed potatoes, spaghetti and meatballs, chicken tenders and grilled cheese.

Beyond the pizza menu, you will find so much more. They offer burgers, wraps, 10 varieties of subs, items from the grill, pasta dishes, and even traditional comfort food fare such as meatloaf and chicken and egg noodles with potatoes for only $8.49. I need to return.

You can actually make s’mores right at your table! They provided us with all the fixins and the kids had a blast roasting their marshmallows right there at the table and assembling their own s’mores. We all agreed it was a unique and sweet ending to a fun-filled evening with family and friends.

The “Lima style pizza” is different from other pizza around town. The family friendly atmosphere is welcoming and I guarantee a fun-filled visit for all. Know that you can be waiting a very long time during peak weekend hours and those times can be extremely loud in the restaurant. Be sure to check out the DIY s’mores. The kids will love it.

Karen Zickes is a mom of three active children and freelance writer who resides in Holland, Oh. She can be reached in
c/o editor@toledoparent.com.