On a hot, muggy day in the middle of June, Sylvania mom Karen Hiller and a dozen or so other Toledo area moms, all with kids in tow, lined the streets of downtown Sylvania. Holding homemade signs, little ones protested right alongside their parents, waving to passing cars, which honked in support.

Heather Nye (Toledo) shared the experience of creating a sign with her 3-year-old daughter: “Lulah isn’t aware of what is going on right now. I tried to ease her into today’s event so she would be prepared. I told her our friends and neighbors were hurting and we were going to go support them and show we care about them. I started making my sign and she said she wanted to make one, too. I asked her what she wanted to say and she said, ‘I want to tell them that we love our neighbors.’ Sometimes the children are the teachers.” 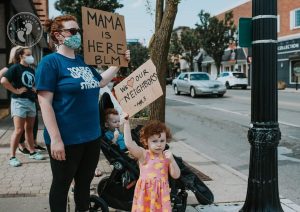 Heather Nye with her daughter Lulah (3), spreading love for their neighbors.

Hiller shared with Toledo Parent why she decided to organize her very first protest and why she felt it was important for kids to be included.

Why did you decide to organize a protest?
I wanted to be part of the change and be an active voice supporting Black Lives. It definitely didn’t feel right to just write about it on Facebook or only donate money to the cause. I think that every person who supports Black Lives Matter needs to stand up and actively contribute so we can see real change in our behaviors and in our laws. 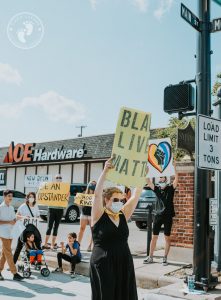 Karen Hiller, organizer, responded to Flloyd’s call for his mother.

Why did you gear the protest to include mothers?
I geared the protest to moms because I read a protest sign that said “All moms were summoned when George Floyd called out for his mama.” I took that to heart.

What was the response?
The response was amazing. WIthin 30 minutes of having posted in a few (social media) groups, there were dozens of replies showing interest and support. Once I created the event, interest grew quickly.

Who helped you organize the protest and what advice did you receive?
Having never organized a protest, I reached out to the Community Solidarity Response Network of Toledo. Ruth Leonard (a leader of the group) was super helpful in walking me through logistics and offered to connect with another local non-profit group called Food not Bombs [that could] provide on-site supplies [like] face masks, hand sanitizer, and nourishment for the protesters. I’ve since been following her group on Facebook and the work they are doing is amazing. I also contacted the Sylvania Police, who offered to have a few bike officers available to ensure the event stayed safe. They were also very supportive at our event. 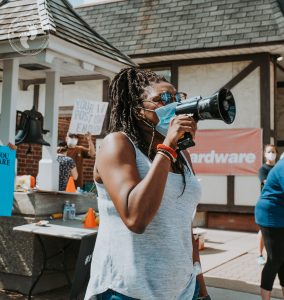 How did you feel about the overall turnout and support from cars passers by?
I was thrilled with the turnout. It certainly wasn’t the biggest protest in the area, but it was the passion of the protesters and the fact that we had moms and kids, aged 2 and up, that was amazing. The support was encouraging; there were honks in support of our protest…fists in the air, shouts of encouragement, and [one woman even threw two] $20 bills out of her car window. We were passing out flyers that had a list of local Black-owned businesses, and as people walked by asking us what they could do to help, we asked them to support those businesses.

What do you hope to accomplish by protesting?
As I think most protestors do, (I) hope to send a message to the community and to law-makers and law enforcement that what is happening to our Black community is wrong, unjust, and will not be tolerated by the American people. Having moms bring their kids showed generational solidarity and the passion of the people who want a safe and hate-free future for their kids.

What did you learn through this experience?
I learned that I can be a voice for change and that, even if I don’t view myself as qualified for the job of organizing a protest, it doesn’t matter. What matters is that we are proactive and outspoken and carry love in our hearts for every person on the planet.

All photos are thanks to Toledo mom and photographer Tiana LaShae. Tiana is offering 30% off all photography packages in conjunction with her upcoming 30th birthday for a short time. 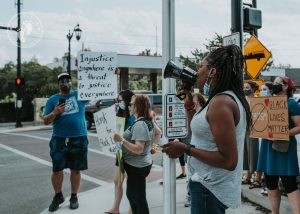