Looking back on my 3 1/2 year old son Brody’s behavior, it has always
been animated, even unruly; I call him my drama king. While he’s extremely
sweet, affectionate and loving, he experiences extremely intense emotions that
flip on like a switch, and he has a tough time following rules. Of course, we have
good days, but more often, it’s a struggle. I frequently ask myself what I’m doing
wrong, though I had convinced myself Brody was like every other curious toddler,
perhaps just a bit more spirited.

This school year, I enrolled Brody in preschool three mornings a week. Because
of his independent nature, I felt the Montessori classroom would be a
perfect fit. I fell in love with the Montessori concept, which “…emphasizes
independence, freedom without limits, and respect for a child’s psychological,
physical, and social development.” Brody loved going to school every day,
and seemed to be thriving.

Then, one rainy Monday a month into the school year, we got a phone call requesting
that I come in to discuss some ‘incidents’. In a way, I’d been expecting
such a call, yet because no issues had been brought to my attention I was optimistic.
When I arrived I was gently informed that things were simply not working out.
That morning, Brody had pulled the fire alarm, ran out of the building, and tried
to crawl under the gate of the playground to escape. The teacher expressed several
additional concerns about Brody’s behavior that involved lack of focus and
involuntary impulsivity, an uncontrollable urge to touch. What’s more, Brody
required a teacher’s full attention to stay on task, a need the school simply could
not fulfill. I tried to fight back tears in a futile attempt to keep my composure as
I collected my son’s things. I was devastated for him. 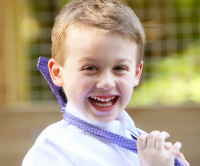 Being Proactive to
Find a Diagnosis

In the following weeks, I placed Brody in the preschool where he’d attended one
day a week the prior year. To explain the switch of schools, I told Brody that the
teachers missed him so much they wanted him to come back. The Preschool Director
was extremely comforting through this transition. “Brody is only three. He
is in school to learn and teachers are here to guide. Try not to worry,”she said.

We met with Brody’s pediatrician to express our concerns and were referred
to School Psychologist Doug Felt at Center for Solutions in Brief in Toledo, where
Brody would be evaluated for ADHD and Autism Spectrum Disorder.

I held onto my doubt, a security blanket of sorts. I still struggled to admit to
myself Brody was exhibiting anything beyond typical toddler behavior. Yet in
doing my own research, ADHD made sense. The three main symptoms in toddlers
are inattention, hyperactivity, and impulsivity. Check, check, check. In my
gut, I knew, but I didn’t want it to be true.

After our first session, Doug Felt gave us his opinion: Brody was exhibiting
signs of ADHD. He explained that symptoms of ADHD and Autism Spectrum
Disorder can be very similar, and hard to distinguish. Kids who are on the
Autism Spectrum, nine times out of 10, will have symptoms of ADHD, because
of problems in the frontal lobe, the decision-making part of the brain. Doug
observed Brody during several more visits and he told us he does not think Brody
is on the Autism Spectrum, but that he ranks extremely high, in the 98th percentile,
for ADHD.

Upon reflection, the diagnosis makes complete sense. Doug said, “Kids with
ADHD have lower impulse control- they make premature decisions. Impulsivity
results in making decisions too quickly, based on emotion rather than based on
the rules.” Doug explained that while kids with ADHD know the rules they are
expected to follow, their brain does not allow them to access the rule before they
act out on an impulse.

“Children with ADHD can only focus on an activity when it is interesting to
them. Usually they move from toy to toy quickly, unless it is constantly changing
and keeping their mind captivated,” Doug advised that we remain neutral
when rules are broken. “When you can’t regulate emotions (as with ADHD), little
things trip you up. Your goal as parents, is not to give any energy when he’s
emotionally flooded. Do not provide nurturing feedback (a hug) or negative feedback
(a lecture) because it sends a mixed message. Don’t interact with him but keep him safe.”

Doug advised that we regularly give positive preventative messages.
“As parents, you can’t anticipate what’s going to happen. Instead, search
for times when he’s coping with novelty, change, and disappointment. These are
times of emotional reaction when punishment is very ineffective. You need to
change the person from within by encouraging them to make better choices.”

Working Together In
Early Intervention

Brody’s teachers have been absolutely amazing in working with us. In order to
give him every advantage and resource available, we’re in the process of having
Brody evaluated by our school district’s office of disability services to see if he
qualifies for placement with a preschool that offers special needs assistance. My
hope is that we are able to help Brody now, before he starts Kindergarten, so
that he doesn’t have such a hard time. I am thankful that the first line of attack
is behavioral modification, not medication. With behavioral issues, it is only
natural to ask, “What did I do wrong?”

Knowing that my son’s struggles are not a result of bad parenting has been
an immense weight off my chest. I have learned to lean on others, and as a result
have been comforted by many supportive friends. And to me, Brody is perfect he’s
just a little “more” than most kids. 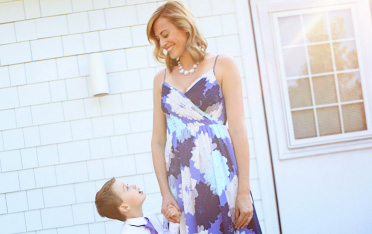 Heidi Borst shares a smile with son Brody. They’ve been on a journey to find answers for his ADHD.